The spirit of the 500 reincarnated in the body of an off-road car, but with something extra – the crossover X factor that is so appealing to today’s car buyer. “It is an X created by two arrows meeting at the centre”, says Roberto Giolito, “designed with great care to avoid any association with a cross symbolising negation, and to express, rather, a convergence of different experiences and an answer to a multitude of mobility needs.”

The relatively short development time for the project was, in part, possible because of the extremely clear brief, explains Giolito who, as FCA Emea design chief, was in charge of the project from the start: “We wanted to create a car defining the centre of the Fiat range, with a different approach than we’d use for a C segment – fusing values from the SUV and compact minivan genres with the iconic chromosomes of the 500”. The process to bring the new car to fruition drew heavily on the experience gained with some of the brand’s other models, from the Panda Cross mini-SUV to the 500L and, of course, the 500 with its bold personality. 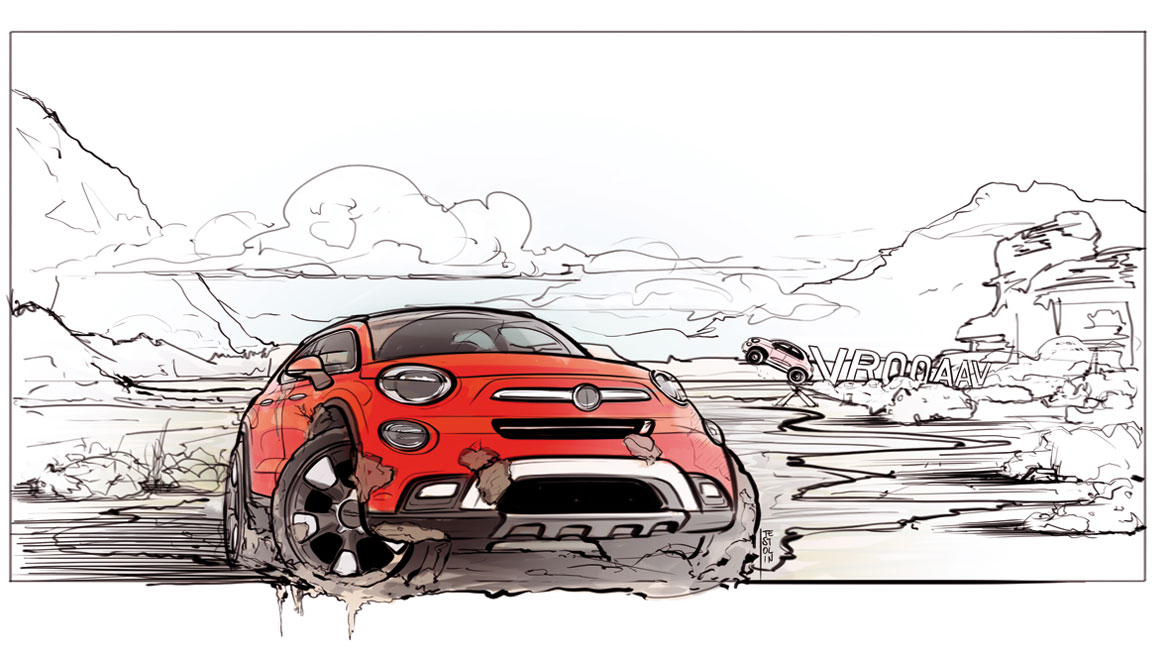 The result is the 500X, a car created with a theme-based approach rather than by subdividing the project into the classic three areas exterior, interior and trim, explain Fiat design director Andreas Wuppinger and Fiat interior design director Virgilio Fernandez. “First and foremost, we had to take the physiognomy of the 500 and apply it to a different set of dimensions in a way that was coherent with the segment, deciding what to change and what to keep to make the car instantly recognisable” says Wuppinger, summing up two of the main themes of the project: the sense of belonging to the 500 family, and what the designers called the “spinach effect” (as in the strength-giving vegetable eaten by Popeye), symbolising the impression of growth and strength that the new car has been imbued with. The third equally important theme in defining the car’s identity is the X factor, “a set of characteristics which may not be immediately evident, but are revealed through use in the elements of the interior, the materials and the exterior” explains Fernandez. 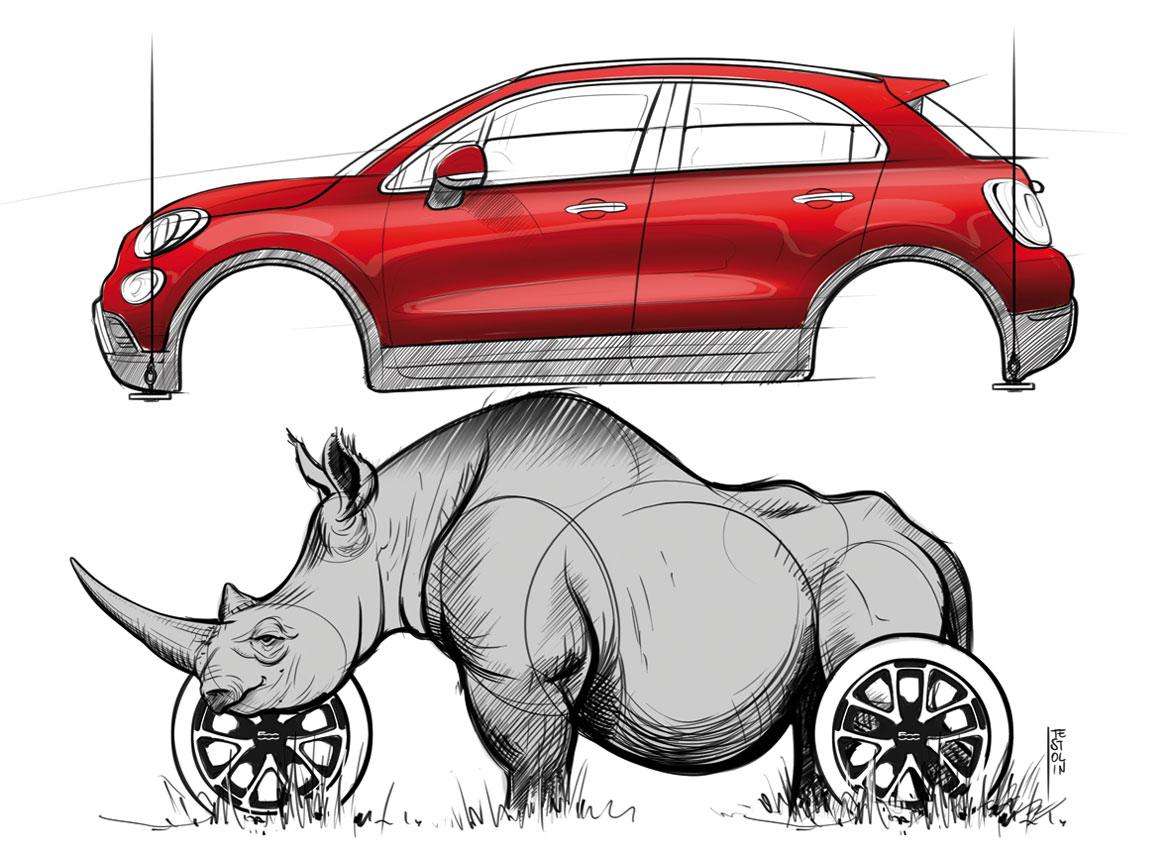 This X factor can already be seen in the earliest study sketches, one of which, for instance, includes a drawing of a rhino, which inspired the car’s attitude. This explains the appearance of a new face with less circular eyes and more determined look than the 500, and with the trademark ‘whiskers’ subtly underscored by a slender air intake. The car’s expression is decisive but not aggressive – “it would have been pointless to add one of those grilles that look like they’re about to

take a bite out of the road” says Giolito. He also draws attention to the deliberately uncluttered flank – where even the character line seen on the 500 has been eliminated in favour of a simple crease – with a C pillar that pushes the roofline forward like a coupé, and protective cladding encircling the entire perimeter, wheel arches included, adding a sense of strength.

A goal throughout the project was to create an impression of greater harmony, which is also clearly evident in the interior. The habits and behaviour of drivers were analysed in detail for the project – “we know that people are not easily separated from their objects and like to take them on board with them”, says Giolito, “so we insisted on a concept of usability, of a car that must fit like a glove”. So the cabin is bristling with numerous, well-thought out cubbies and storage spaces, the most noteworthy of which being the dashboard glove compartment, which opens like a piano keyboard lid. The work done to define the seats is also impressive – these are the result of a dedicated effort to maintain the look of the 500 but applied to more supportive forms, which were needed in light of the 4×4 capabilities of the 500X. 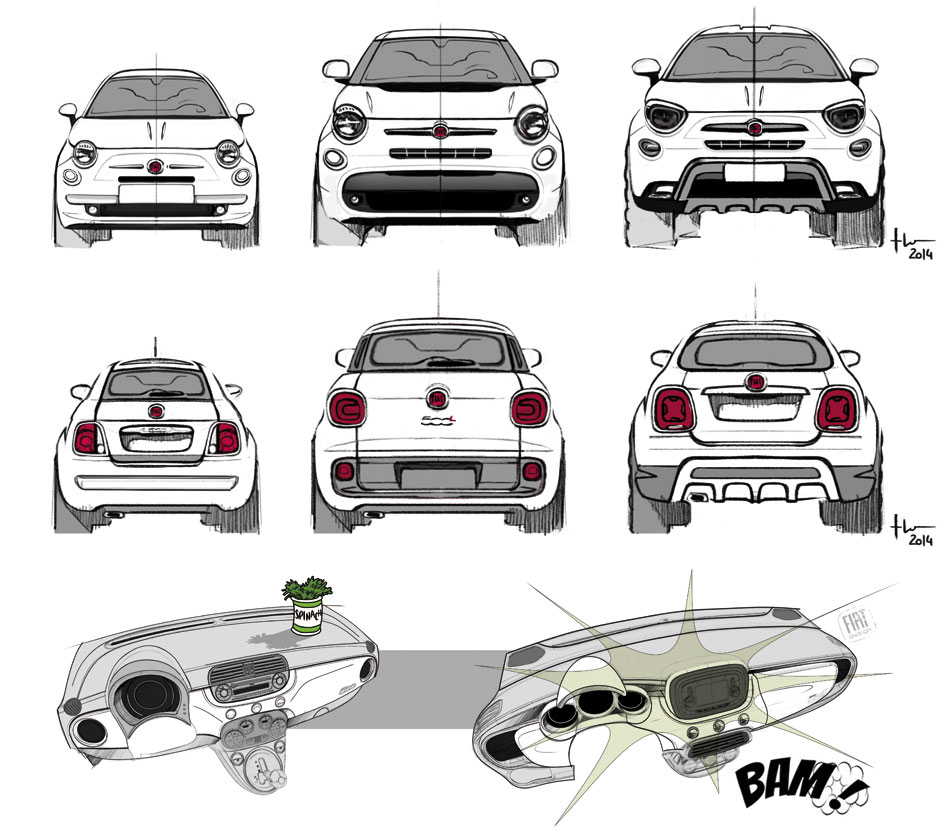 The “spinach effect” is also evident in the robust but harmonious appearance of the materials chosen: “we had to remain true to the character of the 500, but with different dimensions and with contemporary, innovative solutions” says FCA colour and trim director Rossella Guasco, who illustrates the three themes defined for the trim together with Serena Chionetti, one of the designers in her team tasked with the 500X project

This multitude of different interpretations goes hand in hand with the character of the exterior, which is offered as two different variants: the chic and attractive Urban, and the more adventurous Cross, which has clearly learned a thing or two from the Panda Cross, with front and rear cladding and even a skidplate creating a distinctly off-road look.

The article continues in Auto&Design no. 209