IT&Design Intelligent technology
Artificial intelligence: a technological myth that is struggling to become a reality. It has, however, been transformed into a marketing claim used for smartphones to cars, especially those that drive by themselves… by Mario Cianflone

Cover story Toyota ED2 20th Anniversary, window on Europe
Just a month to go before Winter ends and we pay a visit to Toyota Europe Design Development, sunk in the spectacular backdrop of the hills of Sophia Antipolis, near Nice. Given the temperature and the natural light… by Silvia Baruffaldi, Edoardo Nastri

Design story Lamborghini Huracán STO, from the track to the road
Let’s imagine a race car, but one that can be comfortably driven to the racetrack. An extreme vehicle, but one that can also be used for a weekend getaway. A vehicle in which every element is geared towards speed… by Edoardo Nastri

Design story DS 4, athletic luxury
In the ever expanding archipelago of so-called ‘high-wheeled’ vehicles, now undisputed standard-bearers for the tastes of the times, there are people around who still believe there is plenty of room for proposals that depart… by Silvio jr. Suppa

Interview Laurens van den Acker, designing the design team
The wind of change in the Renault group with the arrival of the new CEO Luca de Meo has also profoundly revolutionised design. “There is a great feeling between him and everyone in our team. Luca has the ability to easily understand … by Edoardo Nastri

Concept car Renault 5 Prototype, time for a “best of”
Dynamic in its language, contemporary in its configuration and details, yet unmistakably hinged on a formal construction that will soon celebrate a half century: the latest creation of Renault design synthesises an intriguing look… by Silvio jr. Suppa

Concept car Dacia Bigster, big sister
Dacia is also taking part in the Renault revolution – the Renaulution. Beginning with the new head of design, Alejandro Mesonero-Romanos, who returned to Paris, following Luca de Meo, after an exciting and profitable period at Seat… by Fabio Galvano

Design story Gordon Murray T.50, in the spirit of Formula 1
Gordon Murray is one of the gods of Formula 1. A handful of world titles, first with Brabham and then McLaren, punctuated the European career of this South-African engineer, transplanted to England in 1969… by Fabio Galvano

Design story Mercedes-Benz EQA
A premium, zero-emissions crossover. The Mercedes-Benz EQA is offered as an entry model to the German brand’s electric range, with a stylistic identity that is easily traced back to that of the GLA, a vehicle with which… by Edoardo Nastri

Design studio Icona Design Group, global diversification
“Icona Design never sleeps”. Present on three continents and therefore active 24 hours a day, Icona Design started out in 2010 as a company specialising in automotive styling, which today accounts for 80% of its turnover. The future… by Edoardo Nastri

Contest 3M, wrapping design
Set up a dialogue with the designers of tomorrow so as to generate positive feedback on the challenges facing the automotive industry, leading to design-inspired change. This is the rationale underlying the collaboration between…by Marta Cinti

Vehicle&Design VoloCity, autonomous flying
VoloCity is the child of Volocopter, the pioneering German start-up in the field of drones intended for urban mobility – not on the ground but in the sky. It will be the first flying taxi with autonomous driving and it isn’t science fiction… by Fabio Galvano

Electrification&Design Recharging with style
Much more than a mere accessory, the wallbox for charging electric and hybrid cars is attracting more and more attention, including from manufacturers themselves. Proposing a “branded” charging system conveys a greater sense… by Filippo Einaudi

Industrial design Intelligent design
What will life be like in the future? One of the most recurrent design topics in recent years has been the impact of intelligent or smart technologies, with all their potential implications for the home, work and the individual… by Ali Filippini

Industrial design A robot for a friend
Due to the recent pandemic people have acquired a degree of acceptance of all aspects of automation. Experts attribute this to the role robots have played in handling distancing operations in public places or in infrared disinfection… by Ali Filippini 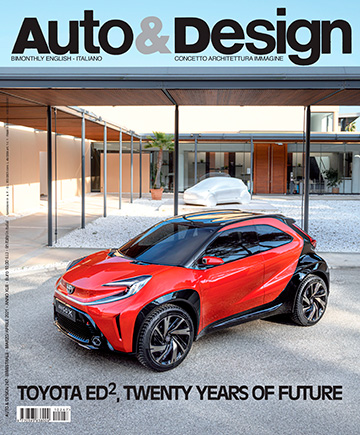