In March 1930 Woolf “Babe” Barnato – one of those gentlemen drivers remembered as the “Bentley Boys” and a two-time winner of the Le Mans 24 Hours (he was also son of the company’s chairman) – won a bet of one hundred pounds racing from Cannes against the famous Blue Train. He arrived in front of his London club four minutes before the train reached Calais. The car in question was the 6.5 litre Speed Six which thus went straight into the record books as part of motoring as well as Bentley legend.

Emblematic of the speed-luxury combination that has always distinguished the Crewe manufacturer’s products, the Speed Six now takes on new life to mark a breakthrough in design and perhaps in future production too. The concept coupé EXP 10 Speed 6 presented at Geneva – the number 6 is clearly visible on the grille – is, in the intentions of the Bentley design director, Luc Donckerwolke, a new vision of a sports car, destined to redefine the entire category.

“We had two major goals,” says Donckerwolke: “First, to explore the possibility of having a fifth type of car along with the Continental GT, the Flying Spur, the Mulsanne and, at year end, the SUV Bentayga, to be slotted in not below but along-side the Continental GT. Not a baby Bentley, but a two-seater geared to performance, an extreme sports cars. The feedback from Geneva will tell us whether or not there is a future for a car like that. Our second goal is to show that we intend to move Bentley Dna forward, checking if we can do without some of the basic elements of Bentley typology. So we have removed the honeycomb grille and headlight frames, as well as the “catwalk” that marks the bonnet and separates it from the mudguards, believing the shape is thus cleaner and more extreme. It is an evolution of our Dna style, the step forward we want to take.”

Now’s not the time to talk about powertrains: 6 cylinders, 8, maybe 12, anything is possible. The MSB modular platform, the same that Porsche will use next year for its new Panamera and Bentley will adopt for the new Continental (prob-ably in 2017 ), will also allow the use of hybrid solutions, so much so that in the Speed 6 there are al-ready some of the copper parts – on the brakes, in the interiors – that characterise Crewe hybrids. 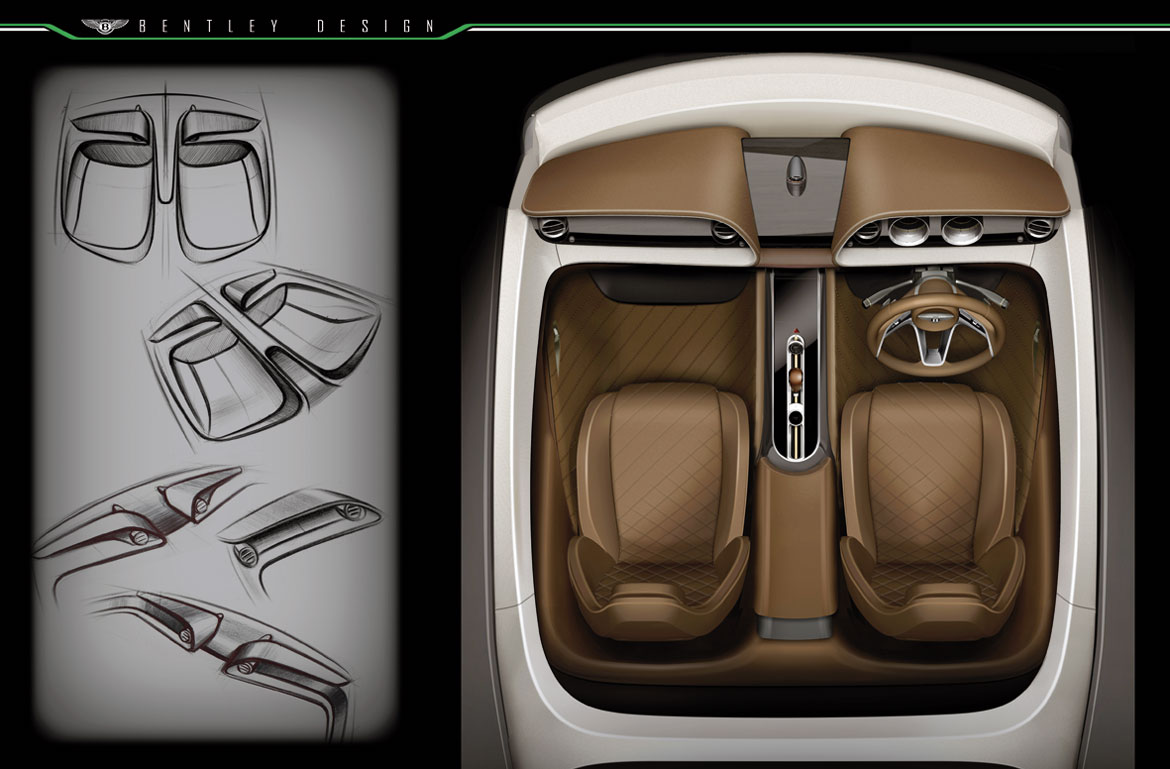 It is time, however, to experiment with a new type of design, this too inspired by the world of aeronautics. “It’s not a total break with the past”, explains Donckerwolke, whose background includes stints with Peugeot, Audi, Škoda, Lamborghini (Murciélago and Gallardo), Seat and Volkswagen, “but the search for a purer, more essential, sportier and more athletic car. Not just a question of styling, but of masses, volumes, and proportions, with English sports car dynamics, namely a small front overhang and a larger one at the rear, the long, taut hood, the compact cockpit resting on the rear wheels. The styling work came later, with the power line starting from the front fender and dying off just before the awesome side over the rear wheels: one Bentley styling cue that we have not abandoned. In the future, however, I would do without cues like the horseshoe that marks the back: I do not want overlapping design elements but an integrated whole, to avoid a retro look that puts a damper on other solutions.”

Thus, with the flat bonnet and the lower, wider grille, the classic round headlights that, however, are grafted on to a much more complex surface, the integrated, catwalk-free bonnet, and the arrow-shaped surfaces at the front accelerating towards the rear, you get a form that Donckerwolke defines as more dynamic, as is also evidenced by the rear spoiler which performs a connection function between the two sides.

The interiors see a return to the roots with the dashboard and its Bentley wings which reach the doors and wrap round the passengers in a three-dimensional play of leather, wood, steel and glass that serves as a liaison between outside and in, in a blend of design, crafts-manship, and advanced technology.