Smiles, relaxed faces and an air of satisfaction are everywhere you look – it’s rare to see a genuinely happy design team. But this time, there’s a definite sense of unchecked bonhomie at the Alfa Romeo Centro Stile, which clearly expresses the hopes set on the new sedan. The room in which the stunning pre-production Quadrifoglio is unveiled is charged with tangible enthusiasm. “This really is a much-awaited car. But above all, it’s a project that fulfils the dream of every designer: to work with the perfect technical package as a base”, explains the design director for the brand, Marco Tencone. “The rear wheel drive, location of the engine and general architecture – which includes aspects such as the track and wheelbase – gave us the perfect layout to build the forms of a true sports car without contrived expressive solutions.” His voice reverberates with an energy that has been waiting patiently for this moment. “Our research most definitely didn’t stop after we launched the Giulietta in 2010” says Lorenzo Ramaciotti, one of the most illustrious figures in the development of this project. “But we were always constrained by the limitations of front wheel drive platforms, which even caused arguments with our engineers. This platform let us pursue a different, much ‘healthier’ approach.” 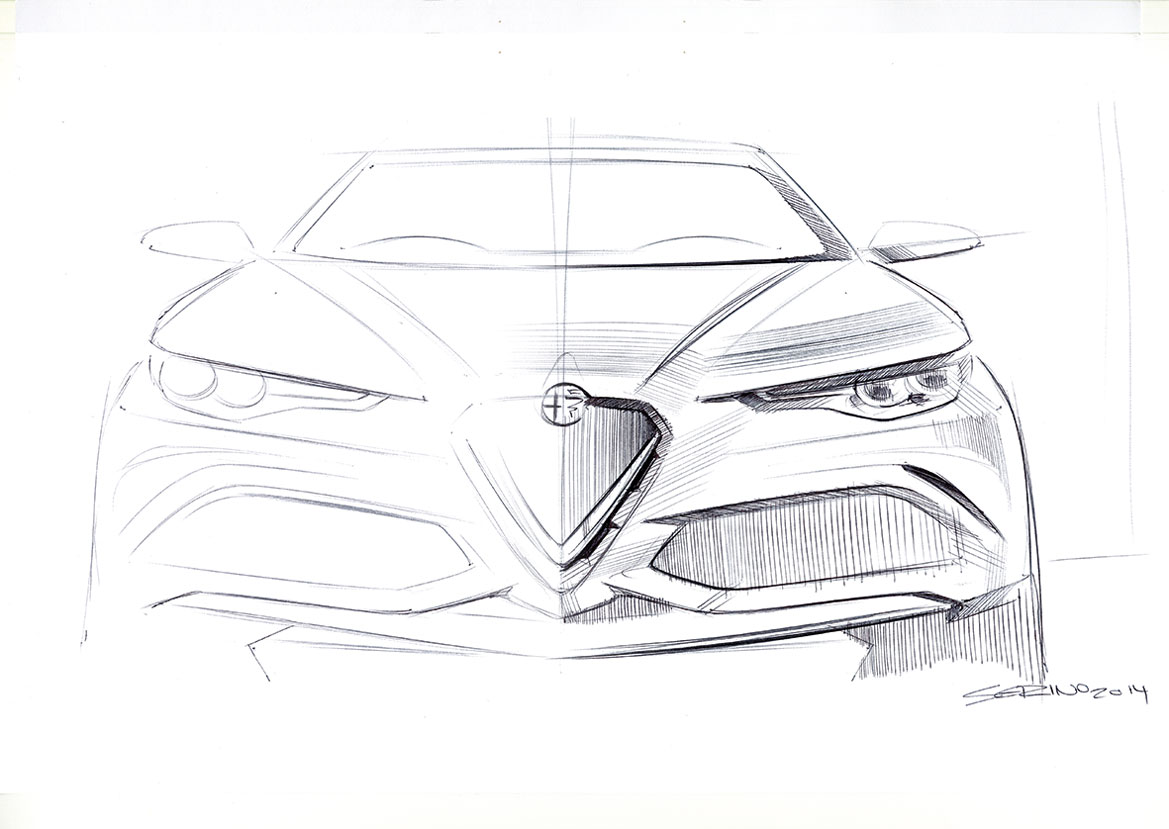 The silhouette practically coalesced by itself towards a natural sense of balance: the cab seems pushed back by the longitudinal layout of the engine, the sculpted curve of the roof visually shifts weight towards the tail, while the minimal front overhang draws attention to the long wheelbase. The volumes of the car appear shrunk around the key structural outlines of the underlying mechanicals, with no gratuitous styling addenda for concealment, cleverly accentuating the musculature of each individual technical solution. “The entire body is designed according to the principle of ‘less is more’, eschewing redundant baroque flourishes, and around a centre line encircling the whole car: this is a line playing an actual structural role in the flanks, and which also generates other volumes” explains Alessandro Maccolini, who was in charge of the exterior. 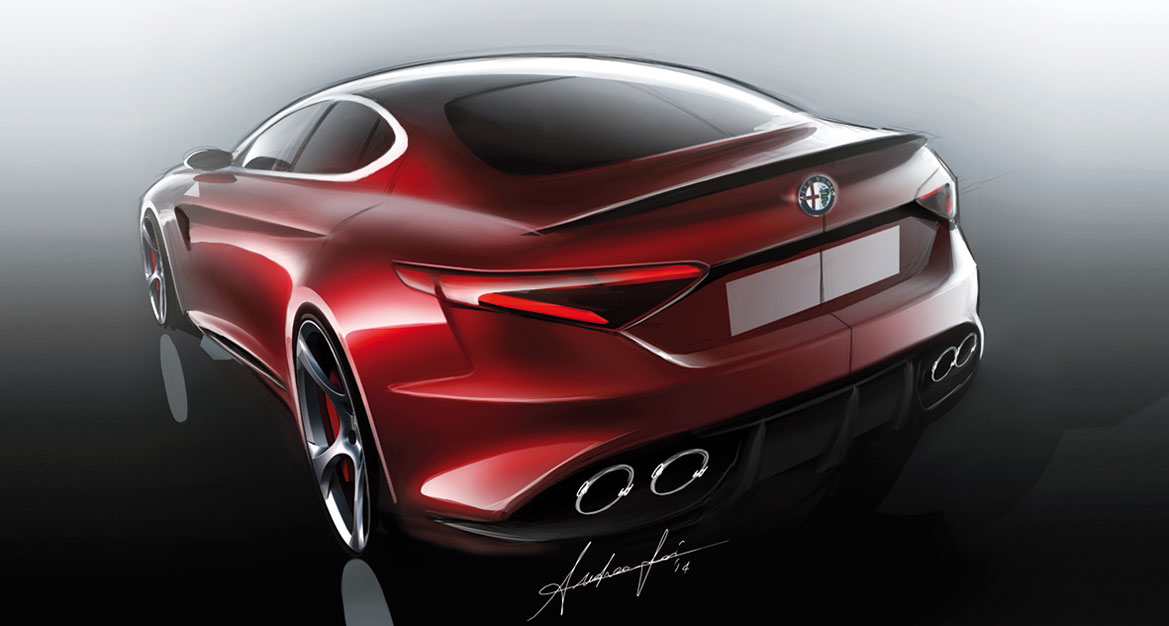 As a result, the surfaces are intrinsically interdependent, as the design did not consider the car from separate aspects but as a single, three dimensional sculpture demanding an extremely cohesive dialogue between the sides, tail and front. In homage to the classic Italian traditions of the 1950s and ‘60s, the graphic language of the Giulia is inspired by essential purity, shunning the excess of creases, steps and chromed accents littering certain rivals today. “It is natural that such a ‘pure’ relationship with the new platform, unfiltered by unnecessary intermediary elements, has resulted in a particularly delicate surface treatment”, says Ramaciotti. The curvature of the panels and the visual links between different parts are all clearly the products of a meticulous design process: examples of this are the sills, which twist slightly as they sink under the front fenders (a solution that works on both milder mannered and fire-breathing versions alike), or the gently curved rear screen, which cites the Alfa 156 and allows for a soft transition between the C-pillar and the shoulder over the rear arch. “This is why I say that, alongside proportions and simplicity, surfacing is the third pillar on which this car is built”, concludes Ramaciotti. 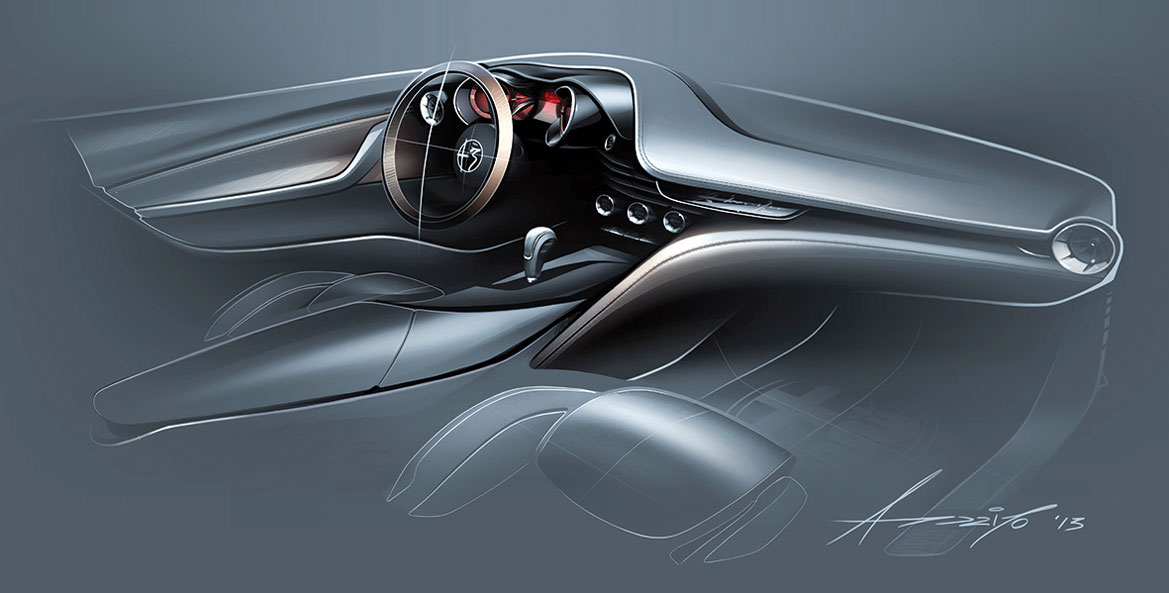 The interior brims with a distinct sense of change, befitting a car heralding the start of a whole new direction: the componentry is all new, the steering wheel flaunts a starter button like a piece of jewellery, and there is an astonishing combination of purity and functional perfection. “We allowed complexity only where it was needed, road-testing the ergonomics of the cab with exacting test drivers” explains interior designer Inna Kondakova, who has a deep passion for her job. At the Centro Stile, there’s hushed talk that the theme of the dashboard transformed into a visual extension of the bonnet, projecting the mechanicals towards the driver, may also feature in all future Alfas.

The article continues in Auto&Design no. 215