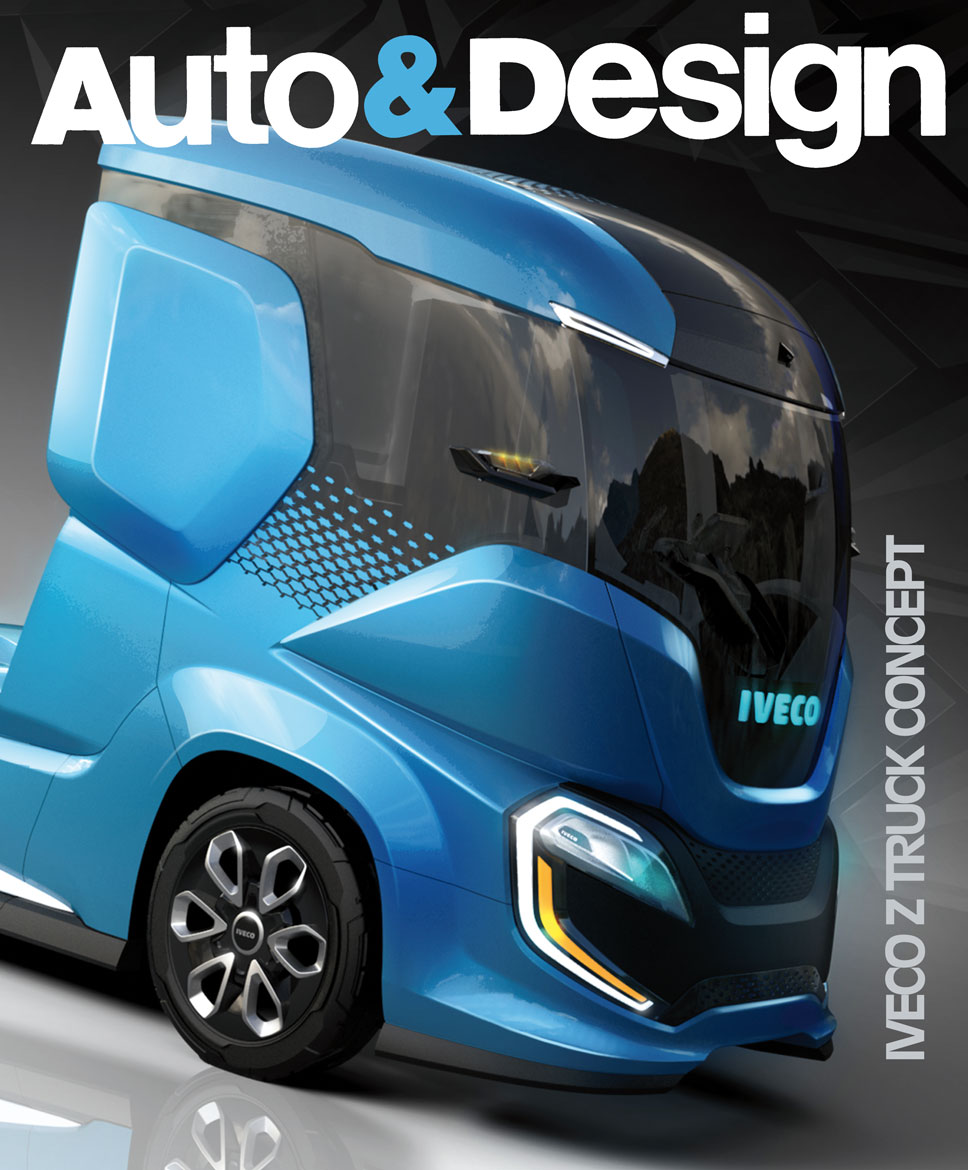 This is a manifesto for the future of wheeled transport, a futuristic, innovative concept that not only redefines the idea of the truck but goes beyond many of the preconceptions linked to working with heavy vehicles. The Iveco Z Truck opens the doors on a new era.

Iveco Z Truck, designed by CNH Industrial Design Centre and Innovation Department, takes a step into the future anticipating the way alternative energy, new technologies and automated driving will change the driver’s life. Its pioneering approach has resulted in this concept being protected by 29 patents.

“The project was born out of the need to respond to the new European regulations on masses, dimensions and emissions. These state that in the presence of an at least 30 per cent reduction in the aerodynamic coefficient, with a consequent cut in fuel consumption of not less than 10 per cent, combined with an increase in active and passive safety, certain structural variations are permitted, among which the possibility of increasing the length of the truck by up to 800 mm”, explains Marco Armigliato,Chief Designer for Iveco. 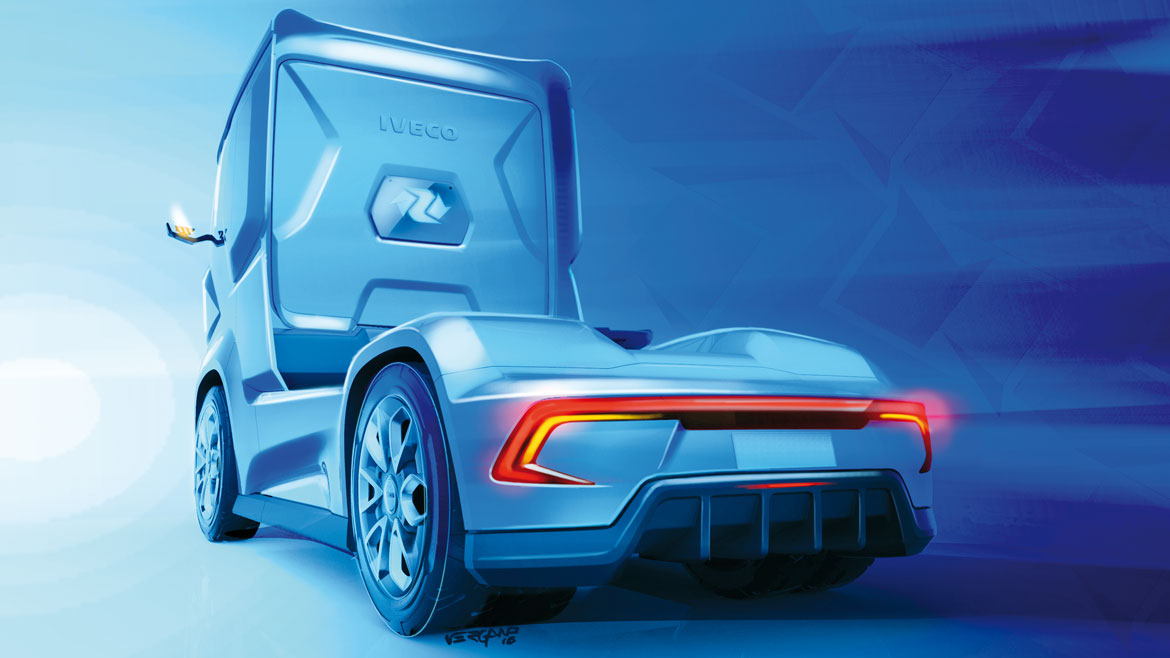 Iveco Z Truck stands for zero Co2 emissions coming from both the use of LNG fuel (Liquified Natural Gas) and of bio-methane, as well as from the dramatic improvement in aerodynamics.

In practice this translated into a formal redefinition of the cab. The front is longer and the form in plan view is tapered, while the cross section retains a vertical volume in the interests of interior roominess.

“The design is inspired by a combination of “hard&soft” concepts where the full, solid forms of the lower part transmit strength and performance and contrast with the lighter upper area and its sweeping glass surface that extends downwards as far as the interior floor to increase direct visibility”, explains Armigliato.

“An important part in the development of the project was the design of the access system”, says David Wilkie, Director of CNH Industrial Design. “In imagining the truck of tomorrow we wanted to get round the inconvenience that is a feature of accessing traditional heavy trucks and, for the first time in this sector, we have designed an access stairway activated by smartphone with an automatic system of side opening steps running on retractable slides”, he explains.

The attractively sculpted design of the Z Truck encloses a minimalist, innovative zero stress environment where the relaxing atmosphere of a clear-coloured living space combines with innovative solutions inspired by the world of sailing and the technical settings of office design. Everything combines to contain all the comfort of a home and the convenience of an office in a little more than five square metres. 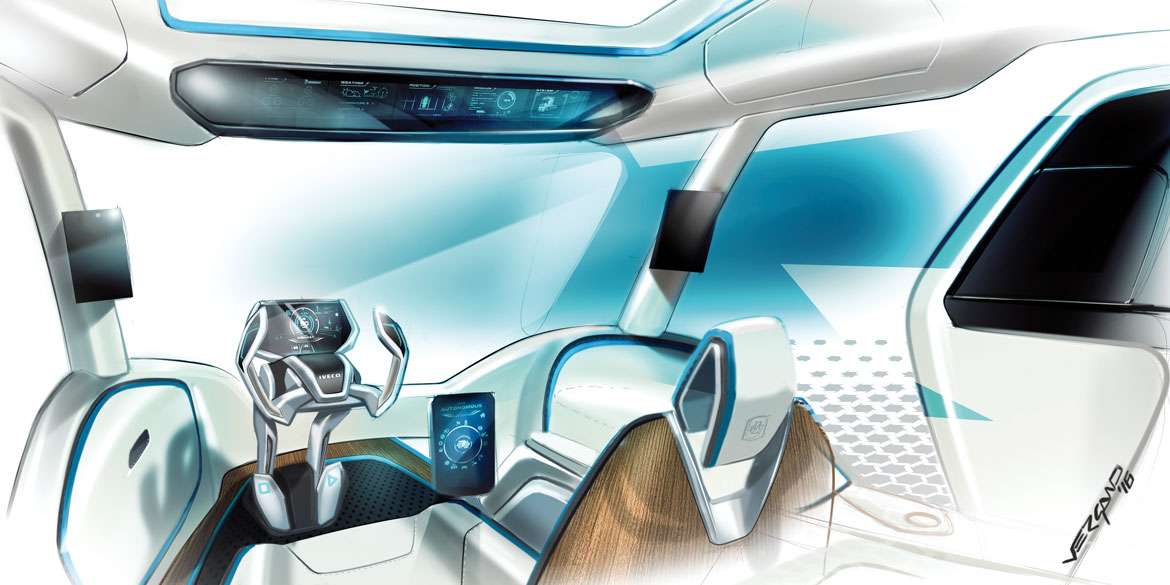 Furthermore, with the vehicle at a standstill, the rear wall slides back by up to 50 cm to expand interior roominess. A veritable gem of modularity that allows the side bench to be lengthened, access to the retractable kitchen and use of the shower. The single bed can be extracted electrically by smartphone and is positioned lengthwise to exploit the whole length of the cab. In the upper section there are numerous storage compartments and a big curved retractable display occupying the rear wall.

“We also wanted to divide up the areas visually, loft-wise, exploiting a layout that radiates out from the driver’s seat to the fittings all round”, says Raffaele Vergano, Iveco Designer. “Setting off technical materials like aluminium, piano black and rubber for the centre, against living room materials such as leather, wood and textiles for the surrounding area, also underlines this choice”, adds Marco Armigliato. 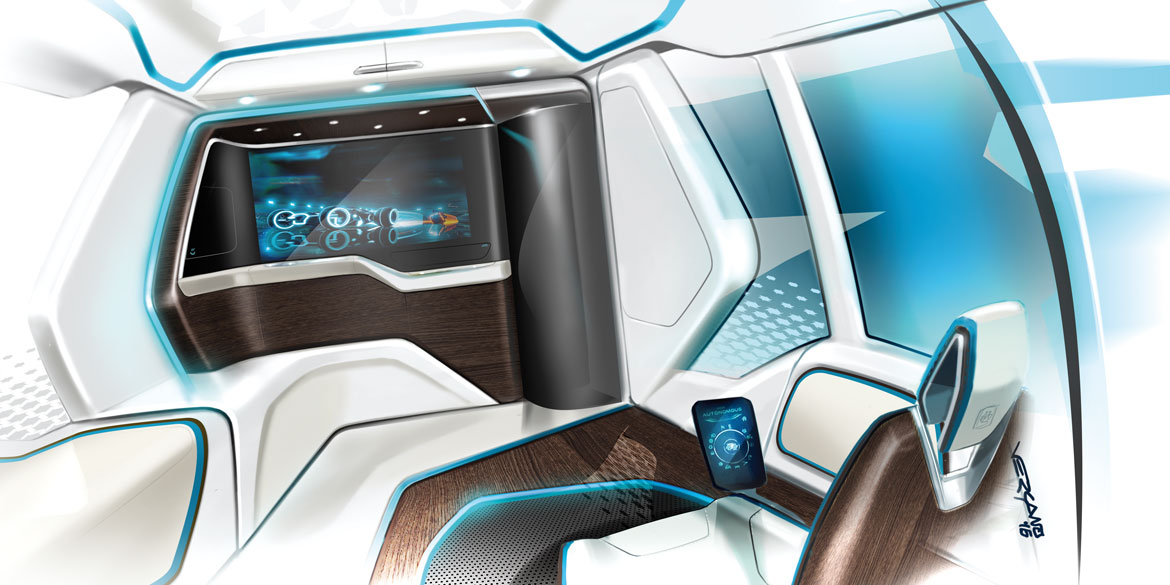 To further rationalise dimensions, the dash has been replaced by a retractable drive-by-wire column, a solution which not only increases front visibility but also enables the driving position to be configured in accordance with how the vehicle is being used.

In urban situations, the driver maintains a vertical posture close to the windscreen, while on the motorway he can take a more comfortable, slightly laid-back position and if he wishes watch a projection of useful content in augmented reality in the lower part of the windscreen. In autonomous drive mode the steering wheel folds back inside the column which can be pushed away from the seat to give more freedom of movement. The seat can be turned right round for relaxation purposes or to enable the driver to work at an extractable table. 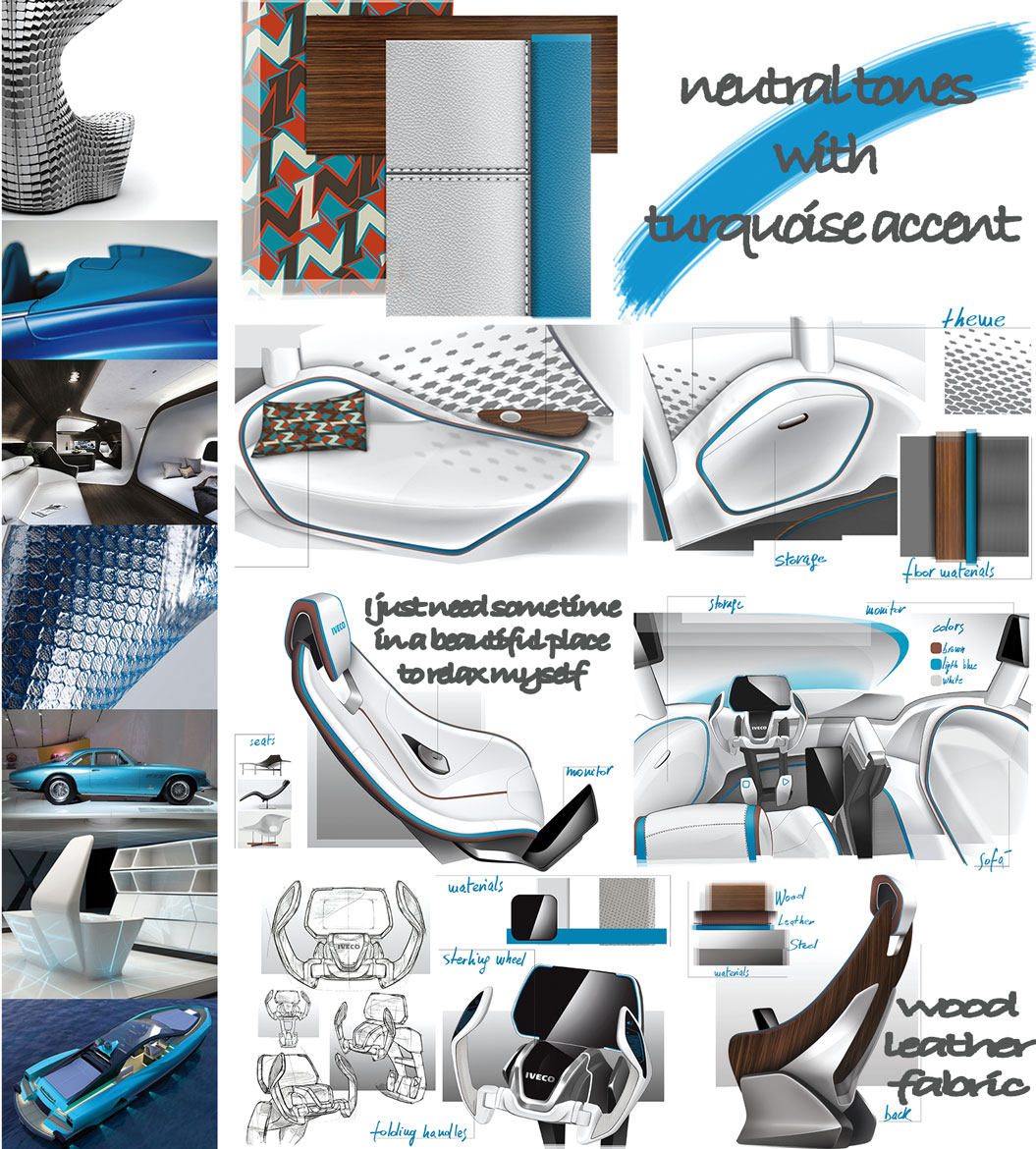 “To meet the needs of the different layouts we sought the ideal interaction between steering-wheel, seat and accessories by exploiting the functional platform that replaces the cab’s active suspension and emits vibrations to offset vehicle movements. A wager won”, concludes Raffaele Vergano.

“This move towards Autonomous driving leads us to a safer world in the future”, says David Wilkie. “Trucks can run in Platooning mode which means that three or more trucks run nose to tail with the leading truck in command. In future life on board will be managed in a clean and efficient way. Our truck is more of a modern office or studio apartment. Life as a truck driver will be more like that of a pilot or high speed train driver”.

Full article in Auto&Design no. 222