TOYOTA SUPRA, THE LEGEND IS BACK

The all-new Toyota Supra, the fifth generation of Toyota’s legendary sports car makes its world debut on January 14th 2019 at the North American International Auto Show in Detroit. The new Toyota GR Supra has been conceived as a sports car in its purest form, with no compromise that would diminish the pleasure of the driving experience. Chief Engineer Tetsuya Tada has adhered to the classic form of a front-mounted, straight-six engine driving the rear wheels, building on the heritage of Toyota’s past Supra generations and original 2000GT sports car. Driving enthusiasts can look forward to an exhilarating blend of power, agility and precision handling, achieved thanks to the car’s combination of a short wheelbase and wide track, light weight, low centre of gravity and highly rigid body. Even at first glance, it’s clear to see how Toyota’s great sports car heritage is referenced in the design of the new Toyota GR Supra. The landmark 2000GT’s influence in particular is evident in the long bonnet, compact body and double-bubble roof, while the distinctive look of the fourth generation Supra is captured in both the front and rear styling, in particular in the muscular rear wings and the arc of the integrated spoiler. 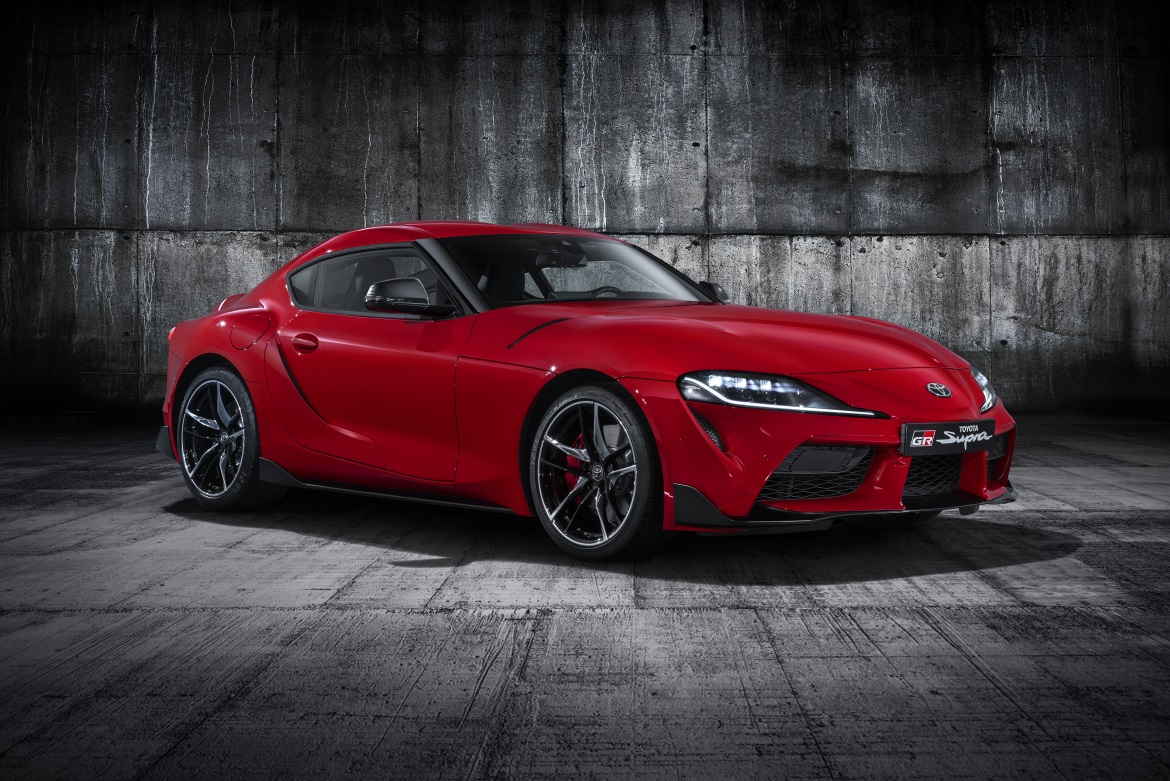 The resemblance is more than skin-deep, though, as the new Toyota GR Supra shares the same classic sports car format of a powerful front-mounted six-cylinder engine and rear-wheel drive as its celebrated predecessors. The Toyota Supra’s design theme was first previewed by Toyota in the dramatic FT-1 concept car, styled by its CALTY studio in California and revealed in 2014 at the North American International Auto Show in Detroit. Toyota Supra Chief Designer Nobuo Nakamura gave his team a simple brief around the concept of ‘Condensed Extreme,’ purposely avoiding any emotive words so that they were free to express their vision of a pure and individual sports car in a truly original design. “With Chief Engineer Tada pursuing driving pleasure, I knew that my mission was to create a design that would be visually and physically exciting to sports car fans,” he said. “By using a straight-six front engine, rear-wheel drive layout – something rarely seen in today’s cars – I was able to reach something beyond Toyota’s boundaries.” 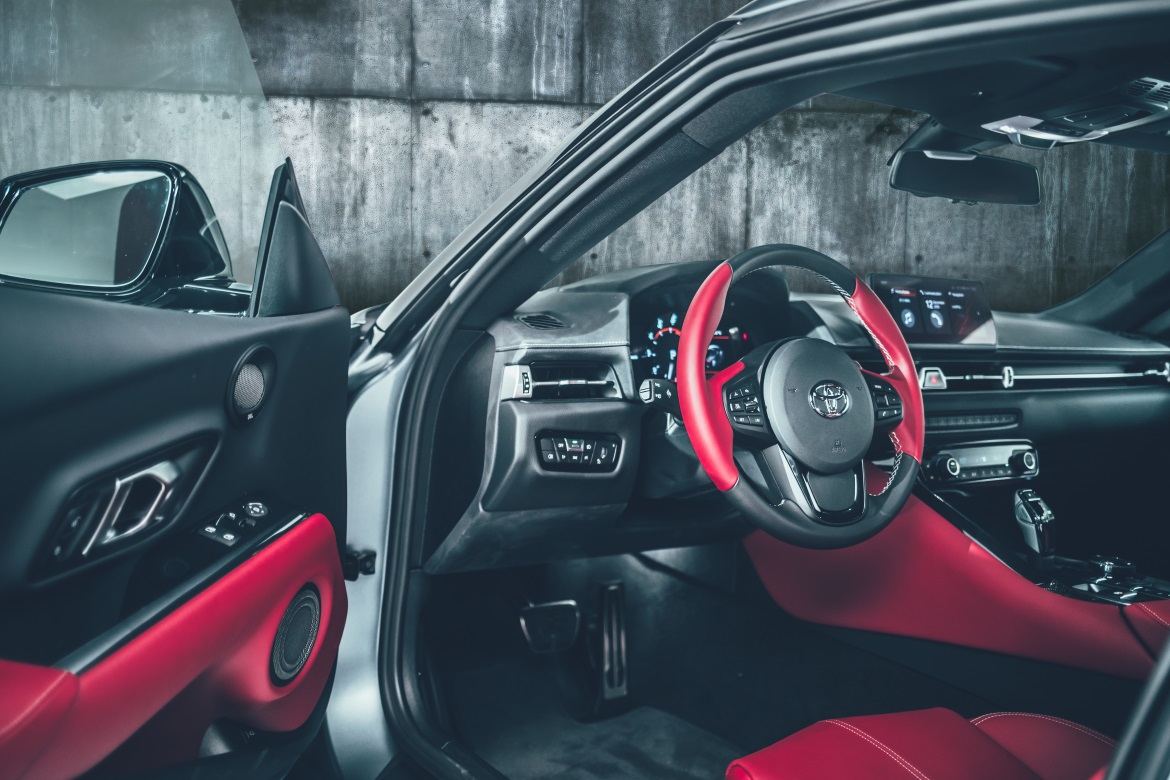 “Condensed Extreme” refers directly the vehicle’s packaging, comprising three principal elements: a short wheelbase, large wheels and wide stance; a taut, two-seat cabin; and a long bonnet with a compact body that reflects the drivetrain combination of in-line six engine and rear-wheel drive. Nakamura envisioned a car that is indisputably modern in design, yet evokes the romance of classic sports car styling. The result approached the limits of what could be manufactured in higher volume, in particular the powerful curves of the rear wings. In the finished design, the ‘Condensed’ theme is evident in the relationship between the Toyota GR Supra’s large-diameter tyres, short wheelbase and overall length. It’s notable that the wheelbase is in fact shorter than in the GT86 coupe, and the tyres are larger. ‘Extreme’ is interpreted in the car’s wide stance, with tight cabin proportions and a broad tread, contributing to a high level of manoeuvrability and stability. 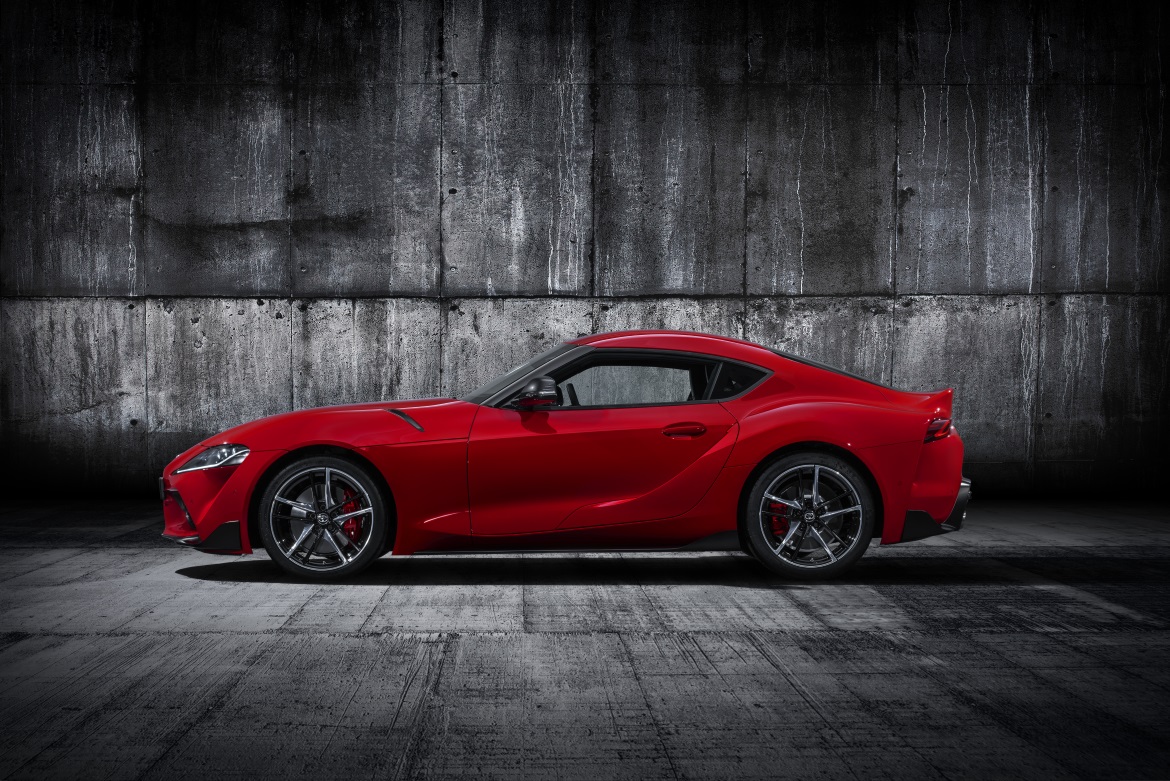 The design was precisely calculated to achieve both optimum drag and lift characteristics, and an ideal front/rear weight balance. For example, the double-bubble roof is not simply a heritage-inspired styling feature, it is effective in reducing drag by reducing the car’s frontal area, without sacrificing headroom in the cabin. The driver’s cockpit in the new Toyota GR Supra neatly combines traditional GT elements with ultra-modern functionality. Designed to help the driver focus entirely on the business of driving, it is directly influenced by the lay-out found in single-seater race cars. The low, slim horizontal dashboard maximises the forward view through the windscreen, helping the driver place the car with precision in high-speed driving, while the principal controls are tightly grouped for quick and easy operation. The instrument panel, centre console and door trim combine in a seamless design that gives the cockpit a strong, unified feel.