Ferrari introduces a new chapter in its history with the introduction of its first series production PHEV (Plug-in Hybrid Electric Vehicle), the SF90 Stradale. The SF90 Stradale’s architecture, in which the cabin is located ahead of the mid-mounted engine, provided Flavio Manzoni and his team of designers at the Ferrari Styling Centre, with the ideal platform on which to craft a genuine supercar of impeccable proportions. More compact overhangs (the rear one is shorter than the front one in particular) and the frontward-shift of the cabin have created a cab-forward-type architecture which emphasises the fact that the engine is mid-mounted. A very low centre of gravity has also allowed the designers to lower the cabin area by 20 mm. Combined with a more curved windshield, slender A-posts and a wide track, this creates a beautifully proportioned car with sleeker volumes. The compact bubble-shaped cabin has an aeronautical cockpit feel and the fact that it has been shifted so far forward is further emphasised by the geometry of the two body-coloured rear flying buttresses that enclose the rear.

Another signature solution is the headlights which hail a move away from the L-shaped look, to a slender slit design integrated with the brake air intakes resulting in a characteristic C-shape which lends the front of the car an original and futuristic appeal. In an absolute first for a Ferrari, the SF90 Stradale uses matrix LED headlight technology to improve visibility in all driving conditions thanks to active beam control. The rear of the car is dominated by high exhaust pipes which are the result of optimisation of the exhaust line layout. Because the power- train is significantly lower in the car than in the past, the designers were also able to lower the car’s tail. Another deviation from the styling typical of past berlinettas is the way the profile of the rear screen no longer follows the line from the roof to the rear bumper. This element of styling discontinuity is evidenced by the separation of the screen from the cooling grille. The tail lights have also evolved quite radically from Ferrari’s iconic round shape. The eye-catching, more horizontal luminous rings create a more horizontal perception of the tail lights which in turn visually lowers the height of the tail. 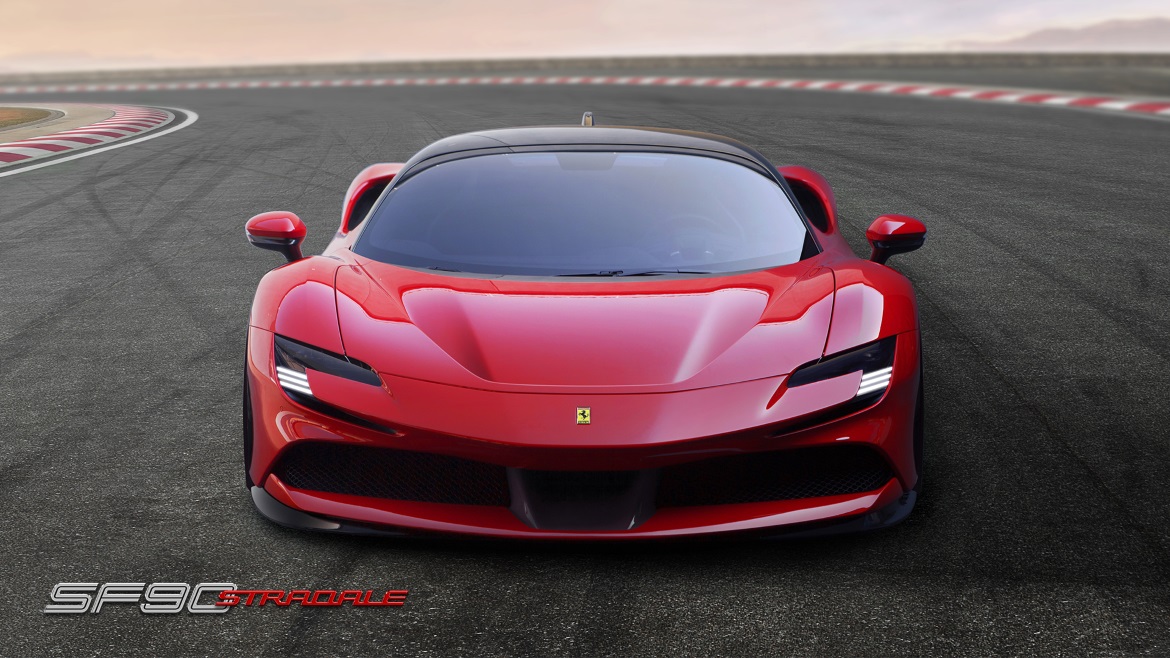 While the SF90 Stradale’s exterior was crafted to underscore its seamless combining of form, technology and performance, the interior is even more radical. The very explicit aim there was to create a cockpit that ushered in an entirely new design direction, the effects of which would carry over into Ferrari’s entire future range. The designers took a futuristic approach to the interface concept with a strong focus on creating a wraparound aeronautically-inspired cockpit with particular emphasis on instruments. This further emphasised and underscored the symbiotic relationship between car and driver. In fact, the SF90 Stradale makes an epoch-changing leap forward both in formal and content terms, updating the Human Machine Interface with all-digital technology. In a first for a Ferrari, the central instrument cluster comprises a single 16” digital HD screen which curves towards the driver to make it easier to read and to emphasise the F1-style wrap-around cockpit effect. This is the first time this type of screen has been adopted in a production car.