Issy-les-Moulineaux is one of the bustling towns of the Paris region. Its Corsican mayor has knowingly attracted numerous media groups to his community, as well as two institutions of the design world: the ever news-worthy Philippe Starck and a youthful school that is about to become one of the most renowned in Europe: Strate Collège. 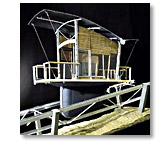 Some design schools have opted for isolation, nature and an idyllic setting geographically remote from the realities of the world. The Strate Collège has taken a radically opposite view. Its buildings are to be found in the very heart of an industrial area, a few kilometres to the south-west of Paris. This is no accident. For Jean-René Talopp, founder of Strate Collège, one of the weaknesses in design education – in France – has long been its inability to adapt to new market conditions. It was this that drove him, in June 1993, to create Strate Collège, endowing it with a name evocative of an original… strategy. Jean-Paul Cornillou designed the school’s logo, surmounted by a small stylised character who looks happy and unrestrained. The message is an eloquent one: at Strate Collège the priority goes to the human being.

Jean-René Talopp has plenty of experience in the realm of design. This refined and enthusiastic man possesses two fundamental qualities for the role: design skill and a passion for teaching. Armed with a diploma from the school of applied arts (the ENSAAMA in Paris), he spent a large part of his career as a designer with Allibert, the manufacturer of bathroom furniture and accessories.

There, he gained experience in the use of plastic materials. In 1984, he started giving courses in composites technology at ESDI (École Supérieure de Design Industriel). And he took to the teaching game. In 1987, Talopp left the pretty town of Annecy, abandoning Allibert and the designer’s trade, to take up the position of director general at ESDI, where he would remain until January 1993. In full-blown recession, Jean-René Talopp reckoned it was time to take a new look at the world of education and design: “It was imperative to integrate the teaching of industrial design with the enterprise culture,” he firmly states. Evolution was inevitable, and justified the foundation of Strate Collège. The doors opened at Saint Quentin en Yvelines in June 1993 (it would move to Issy-les-Moulineaux in April 1995).

Jean-René Talopp was at once joined by Maurille Larivière as director of education. With experience gained at ENSCI (École Nationale Supérieure de Création Industrielle), a very different school from ESDI, and directing a design agency of his own creation, Maurille Larivière ideally rounded out his partner’s abilities. Immediately, the school set up special links with the manufacturers. With its methods, the character of its teaching staff and, in particular, its attitude, Strate Collège maintains a direct hold on the industrial world. The syllabus takes five years. Entry to Strate Collège, open to all high-school graduates, is governed by the outcome of an interview with Maurille Larivière or Jean-René Talopp, who assess the candidate’s suitability.

The first two years are dedicated to learning the designer’s craft, putting it into practice, exploring the history of art, studying the various means of expression. Drawing and illustration occupy a predominant part of the timetable, but the human sciences are considered equally important. During the third year, the all-important decision between ‘product’ and ‘transport’ is made… in the knowledge that, on entering the school, the majority of students reveal a preference for cars. But Strate Collège takes it upon itself to dissuade them from dreaming of Ferrari or Aston Martin… Later, during the fourth and fifth years, the students discover the pragmatism of the car industry when they go off on their placements with manufacturers. From the fourth year on, the school is open to engineers. Each year more than a dozen apply for a place at Strate Collège, which also has a special relationship with the École des Mines France’s premiere engineering school.

Strate Collège is a private institution. It therefore does not receive the benefit of any state aid. Fees amount to 29,000 FF ($4,950) for the first year, 36,000 FF ($6,200) per year for the following three, and 25,000 FF ($4,250) for the final year. The college has around 150 students in all, with, alas, the majority of them males (over 80%). The teaching staff includes numerous personalities from the car world: Michel Harmand, former chief of interior styling at Citroën, heightens the young people’s awareness of sculpture; Arlette Barré-Despond, author of an impressive dictionary of design, teaches history of art; Anne Asensio, one of the Renault design chiefs, provides living encouragement for all the women contemplating this profession…

Regarding the early years of activity, the results are extremely encouraging. Since 1995, a first generation of graduates has emerged (of students who had begun their study cycle at ESDI). There were five in 1995 (all in the ‘Product’ section), sixteen in 1996 (with five in ‘Transport’) and eleven in 1997 (six in ‘Transport’). With diplomas in hand, the students are practically assured of finding a job. The five budding designers who graduated in 1996 have been engaged by Renault, Peugeot and others.

Fortified by its success, Strate Collège has achieved an enviable reputation. With the best illustration being the trust it has been accorded by the big names in automobile design.

The article continues in Auto & Design no. 105