The new Scania S-Series was elected truck of the year 2017, universal recognition for a vehicle that has always been known for its build quality with a touch of technological and stylistic “conservatism”: today it is completely new. Rethought out from scratch. In the past, the design of the “King of the Road” – as this Swedish truck is called – saw a lot of work from Bertone, as regards both the design and the modularity of the structure that allows the production of a variety of cabins. The new series was developed by Scania’s Inhouse Design centre. We interviewed Kristofer Hansén, head of Scania’s Styling and Industrial Design division.

As soon as the new Scania was presented it created something of a stir for its strong resemblance to the previous series. This was of course a choice, how did it mature?

“That’s not hard to understand. Since 2007, when we were assigned the task of developing the new vehicle, we have travelled the world (in the main Scania markets, editor’s note.) in our quest to understand the values the new series had to transmit. We talked with clients, with business leaders, as well as with people who have little to do with transportation. We experienced that the DNA-heritage was very strong, and we chose to develop that, but make it even stronger and looking in to the future. Scania styling cues have to be recognisable dynamically, when you see the vehicle for just a few seconds: the horizontal ribs on the grille, traditional for Scania, the image of strength, the horseshoe pattern of the trim details; the “T” structure of the front/side with the black part that follows the pillars and the frame of the door, the shape of the headlight area or the side.

All the hallmark Scania styling cues are present in the new series, taking into account the enormous air flows necessary for the correct operation of very powerful Euro 6 engines and a minimum rolling resistance. Proportions are fundamental, both graphically and in terms of volumes, as well as the perception that is transmitted by the lines of what, in the end, is a “box”! 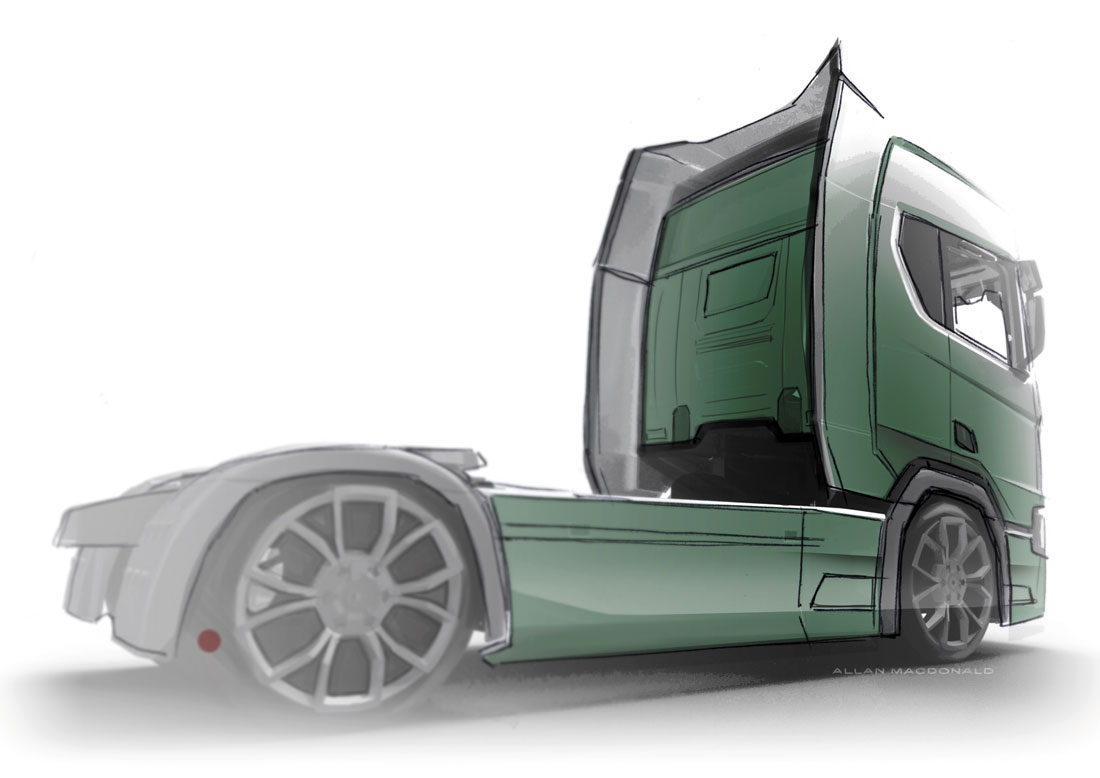 Actually it was even longer, we have been working on it in our minds since 2004. In 2007 we were given a formal assignment, then the 2008-2010 crisis moved some of the dates forward, making the project long and complex, but we did everything to try to keep development costs down.

What were the main points you had to develop?

Certainly the aerodynamics for optimising fuel consumption, the retention of Scania DNA and then the perceived quality of the interiors, along with an unparalleled drivability. It is a technical, ergonomic and styling combination that is traditional for us. It’s part of the Swedish way of understanding things. 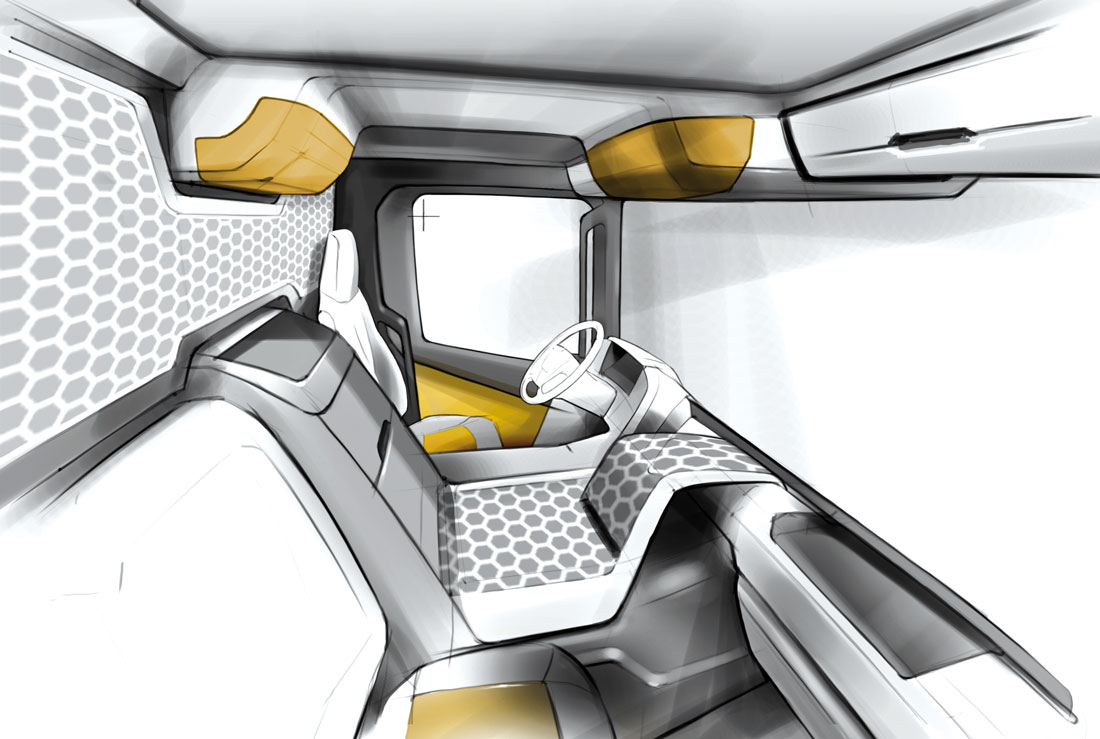 Is the focus on interiors so important?

Sure, the new Scania is designed around the driver. First, we moved the driving position, a few centimetres, both forward and to the side, making a difference both for driving and for comfort: a complex ergonomic issue. Then we tried to convey quality and sturdiness both through the forms and by using the best materials: resistant to wear and dirt, often with inserts of different materials, including metal, in the style of the highest-end saloons. 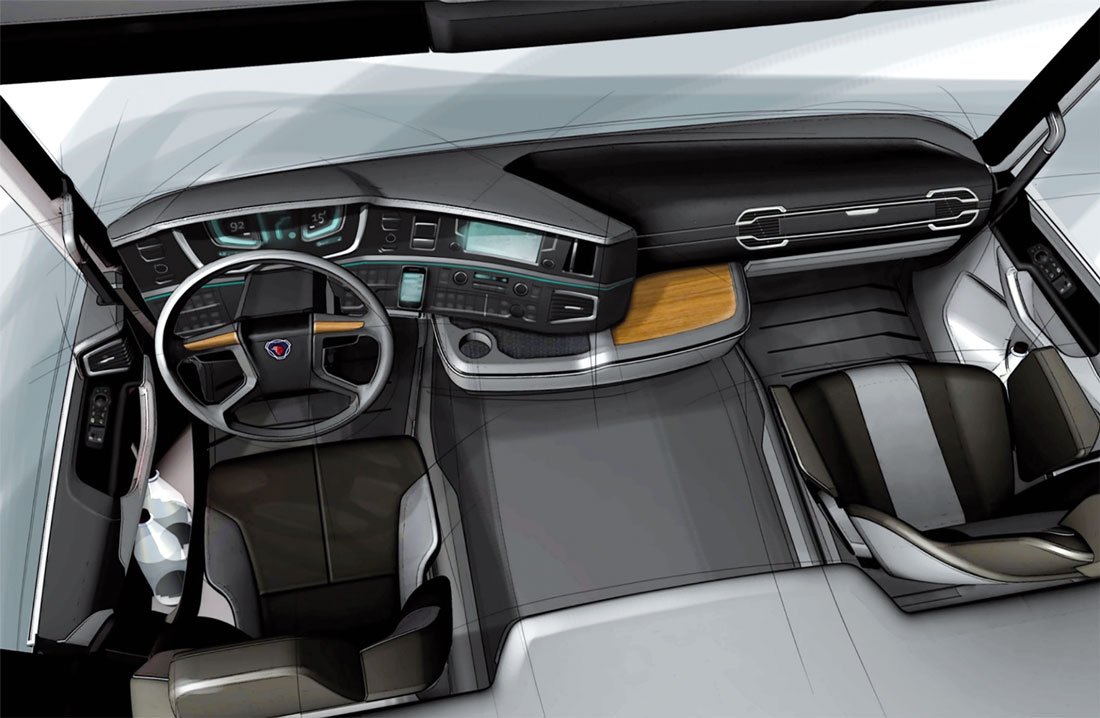 Observing the interior closely there is a sort of dualism between the driver’s position and the passenger. Is that correct?

Yes. We tried to create two different environments. Ergonomics and details are the key elements. The dashboard must be simple and intuitive. The interface created by the electronic equipment on board, but also the physical part of the controls, must bring drivers to perceive the workplace as extremely professional, but also being simple and intuitive. The feeling we want to convey is that of driving a prestigious vehicle. The passenger area must guarantee maximum comfort and maximum relaxation, while running and during stopovers.

Want to tell us something about the grille?

In practice, there are two identical grille hexagons. Maximum flow permeability, minimum noise and an attractive appearance. It is a particularly complex component, where form, function, aerodynamics and production capacity intersect in an incredible way.

It is superfluous to add that the new Scania’s have been and are an unprecedented commercial success for the Södertalje firm.

Full article in Auto&Design no. 225