NISSAN Z PROTO, PAST AND FUTURE

Nissan presented Z Proto, demonstrating a clear desire to launch a new generation of the legendary Z supercar. The prototype boasts a completely new exterior and interior design and under the bonnet beats a V6 turbocharged petrol engine combined with manual transmission. Designed and developed by the design team in Japan under the guidance of Alfonso Albaisa, the Z Proto has modern, eye-catching exterior lines, with a design that takes inspiration from the past and pays tribute to the original version. The pearly yellow bodywork is a tribute to the colour choices of the first generation Z (S30) and the 300ZX (Z32), and is matched with the black roof. 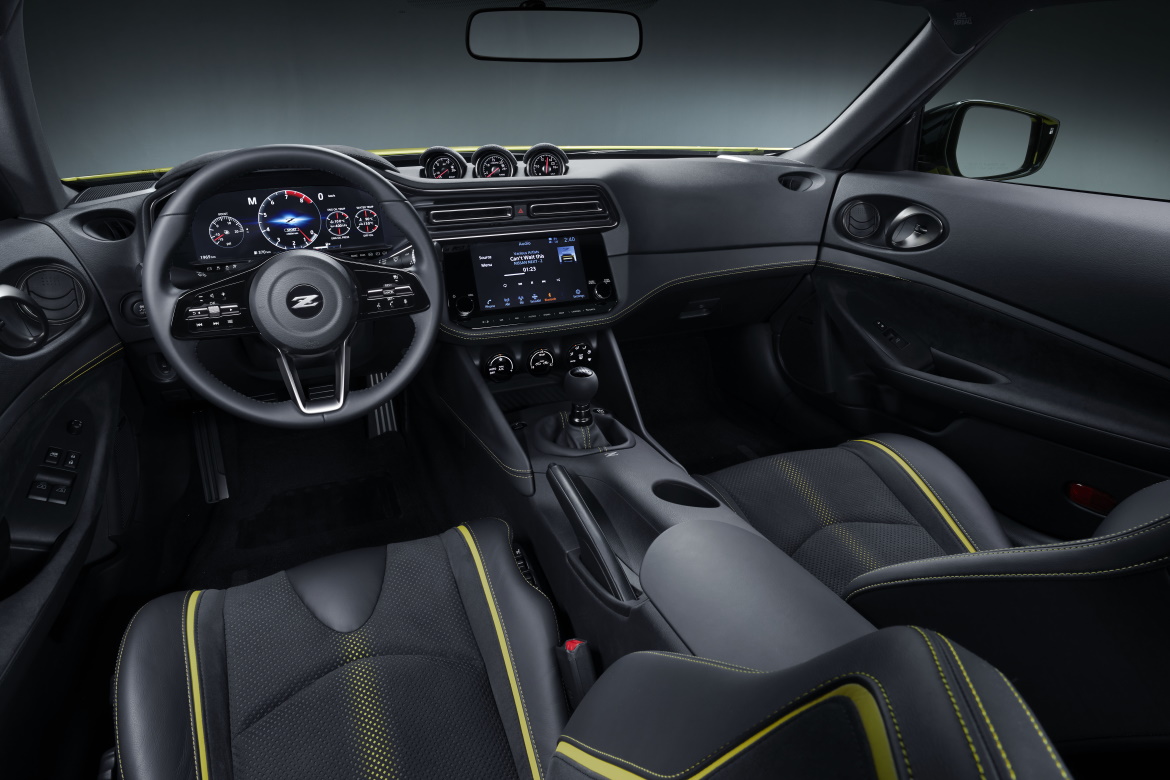 “Our designers have done numerous studies, trying to identify the element that has decreed the success of each generation,” Albaisa explains. “In the end we decided that Z Proto would travel through time, through decades and into the future. The shape of the bonnet and the drop-shaped, oblique LED headlights are unmistakable reminders of the original Z. The rectangular grille dimensions are similar to the current model, with the addition of a series of oval fins to revisit the look. The silhouette expresses sportiness and elegance. “The LED light clusters have two semi-circles reminiscent of those of the 240ZG from the 1970s, which is only marketed in Japan,” adds Albaisa. “The ZG has transparent dome lenses which, when illuminated, diffuse two circular halos above each luminaire. We liked this feature and discovered that it fits the new Z”. 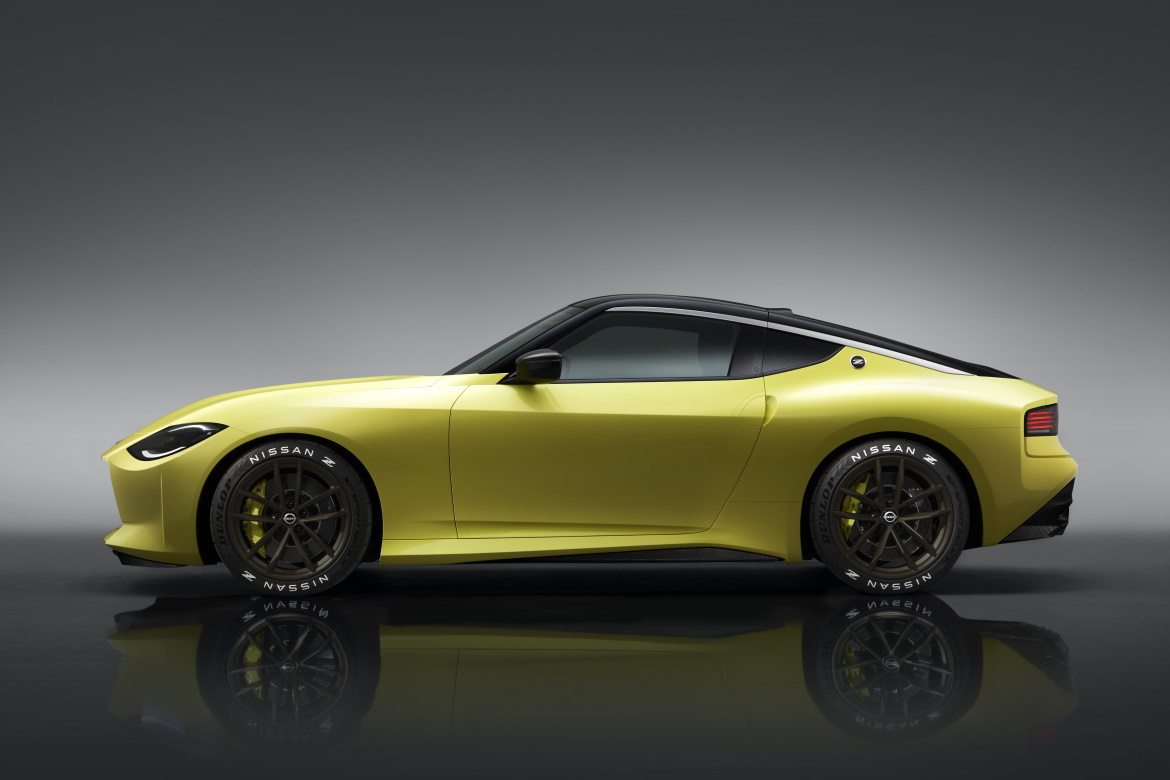 The similarity with the original Z is even more striking when looking at the Z Proto from the side. The roof line joins the nose to the square tail, redesigning the profile of the first generation Z, where the rear was slightly lower than the front wing and gave the Z its unique scenic presence – now further emphasised by the link between the rear compass window and the lowered tail trim. The tail is inspired by the rear lights of the 300ZX (Z32), which have been reinterpreted in a modern way. The LED light clusters are set in a black rectangular band that also embraces the sides. 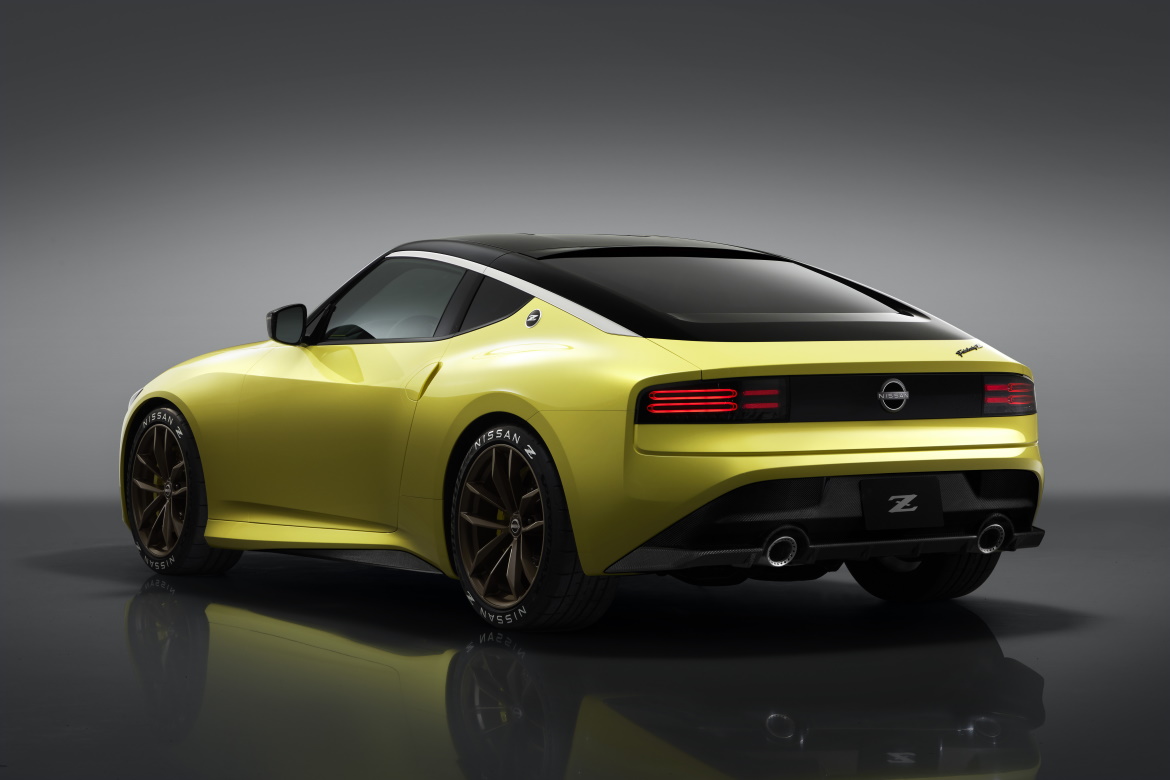 Designed as a tailor-made suit for driver and passenger, the Z Proto’s cabin is an ideal blend of modern technology and Z-tradition influences. The designers sought advice from motorsport professionals to create a competitive interior environment that is ideal both on the road and on the track. You can already tell from the instrumentation: all the key information is shown on a 12.3-inch digital display, readable at a glance by the driver – such as the red gear shift indicator at 12 o’clock. The new steering wheel offers immediate access to the controls, without losing its vintage look. The interior is embellished with yellow details, including visible stitching on the dashboard. The seats are also yellow and have a shaded stripe in the centre that gives a sense of three-dimensionality.