Luigi Colani was an out-of-the-ordinary designer. A German of Swiss origin, Colani was born in Berlin in 1928 and died on September 16, 2019 in Karlsruhe. Wrote Serge Bellu in Auto&Design no.51: “Colani is not comparable to other designers, especially in automotive dress. He is elsewhere, on the fringe, undoubtedly extremely ahead. His greatness is not tangible because he overbearingly penetrates the unconscious of his contemporaries”. Coming from a large family, Colani began to deal with materials from an early age: he himself recounts how he often built his own toys and how, thanks to this, he learned to handle materials such as wood, iron, plaster or clay.

After attending the Academy of Fine Arts in Berlin, Colani enrolled in 1948 at the Sorbonne in Paris to study aerodynamics and in 1953 he moved to California at the Douglas Aircraft Company, where he participated in several researches on materials for vehicles. Colani’s automotive design is entirely linked to the concept of aerodynamics and functional form. It is November 1967 when he files the patent for the C-Form, which consists of an upside-down airplane wing shape that from 1981 onwards is adapted to numerous sports projects: GT90, BMW M2, Colambo, Assym. Among these, only one passes the stage of maquette to become a berlinetta with Citroen 2CV mechanics. 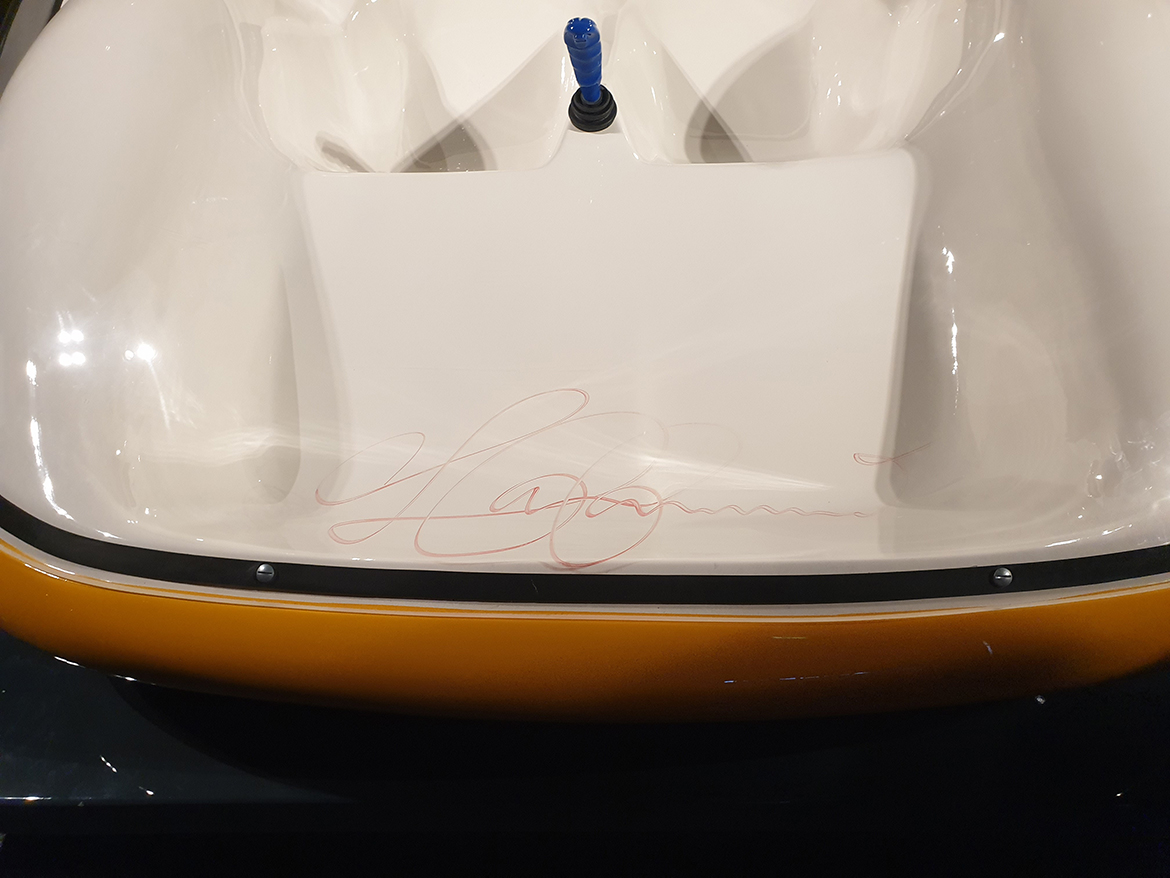 Its aerodynamic forms allow it a Cx of 0.17, an extraordinary result even for our days. The radical proposals that Colani makes as a consultant to the most renowned manufacturers, from Audi to BMW to Volkswagen, are never put into practice and so the designer decides to leave for Japan where, writes Bellu, he is welcomed as a prophet. “Colani divulges a philosophy from which the “soft line” that has become typically Japanese is born. Through his representatives in Tokyo, Colani flooded all sectors of the industry: from Sony hi-fi to Canon photography, from Yamaha motorcycles to Sunreeve glasses. The result is that in a few years he is the most requested designer in Japan, ahead of names like Giugiaro and Mario Bellini.

In the spring of 1987, Colani inaugurated a 2,500-square-meter, all-white atelier. It was here that he presented his interpretation of the Porsche 959, while after only a year he moved back to France to take on new projects. “What has Luigi Colani done in this world? His references such as Erté, Gaudi, Bosch, are put into orbit in a timeless space. The automotive world p undoubtedly too narrow for this visionary of the great spaces. If Colani is not the greatest designer of the century and of the earth, perhaps he aspires to the ascent of the cosmos”. 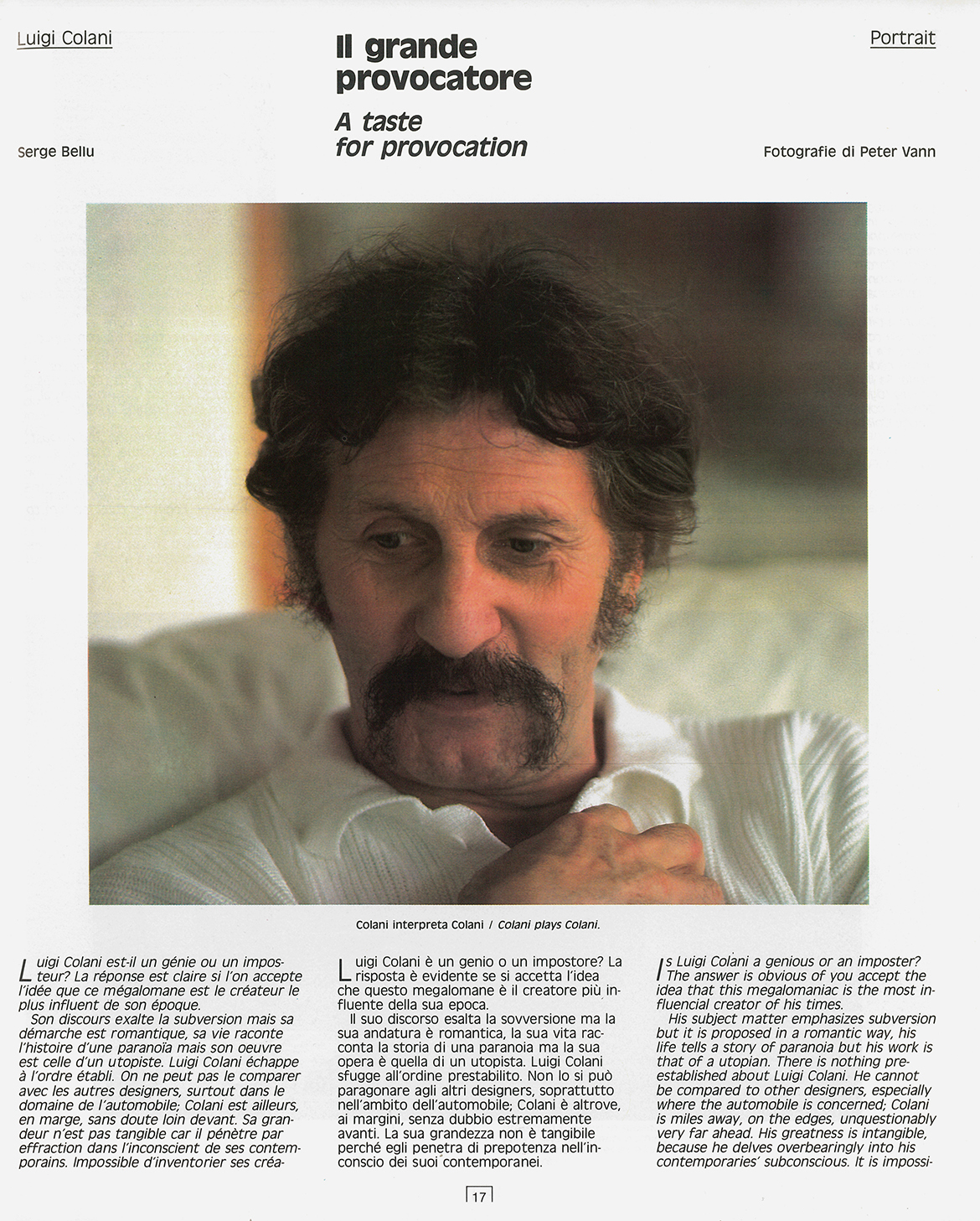 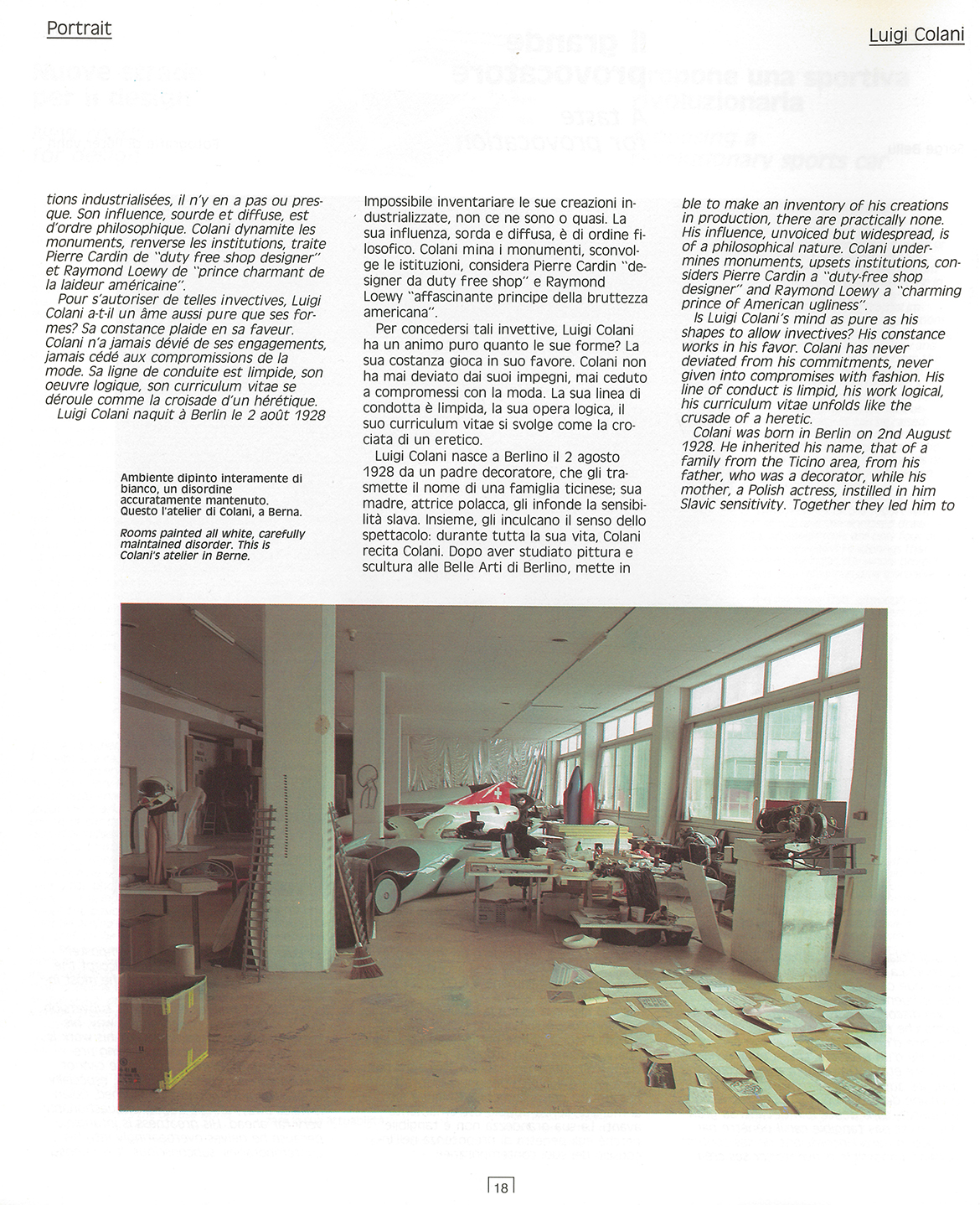 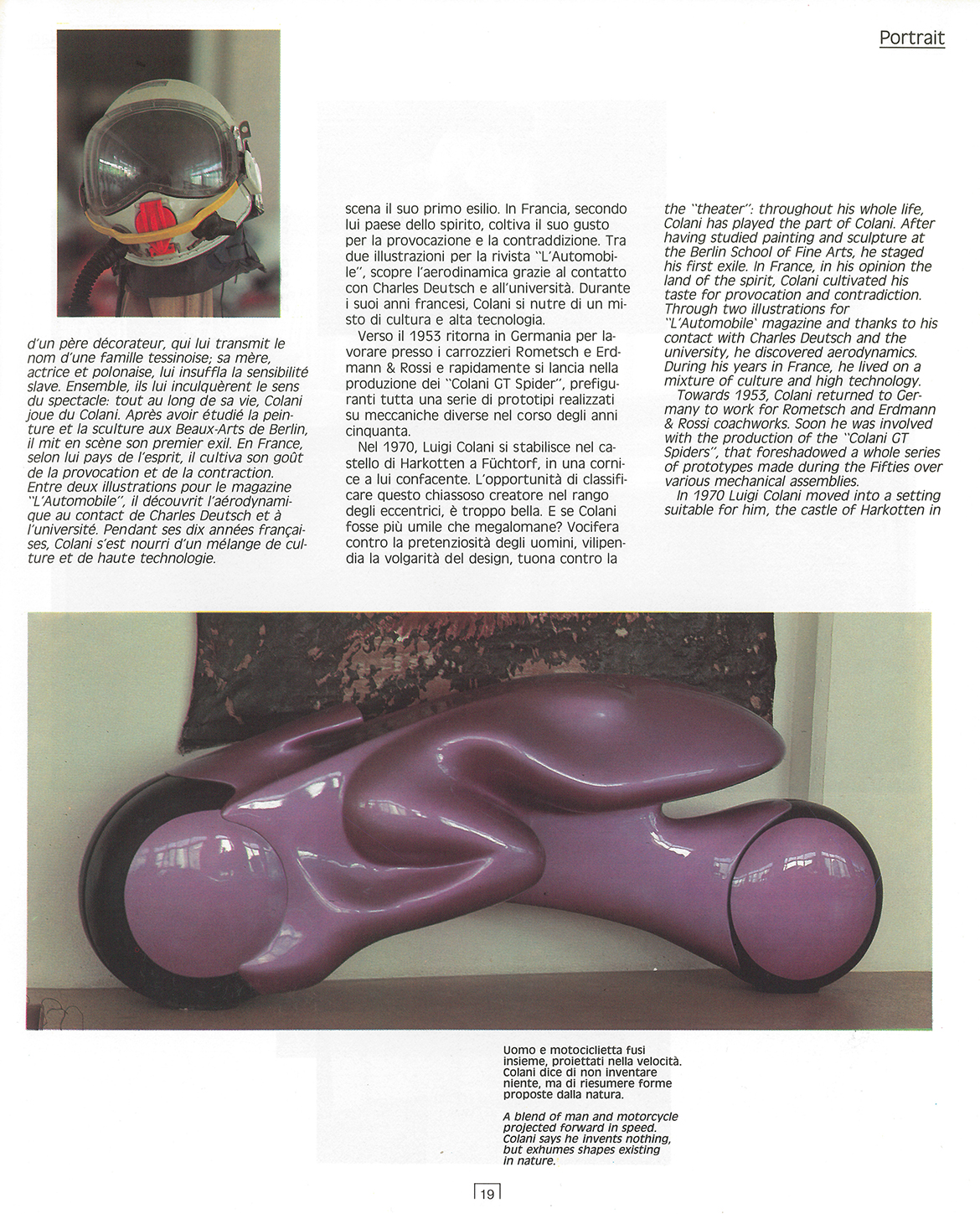 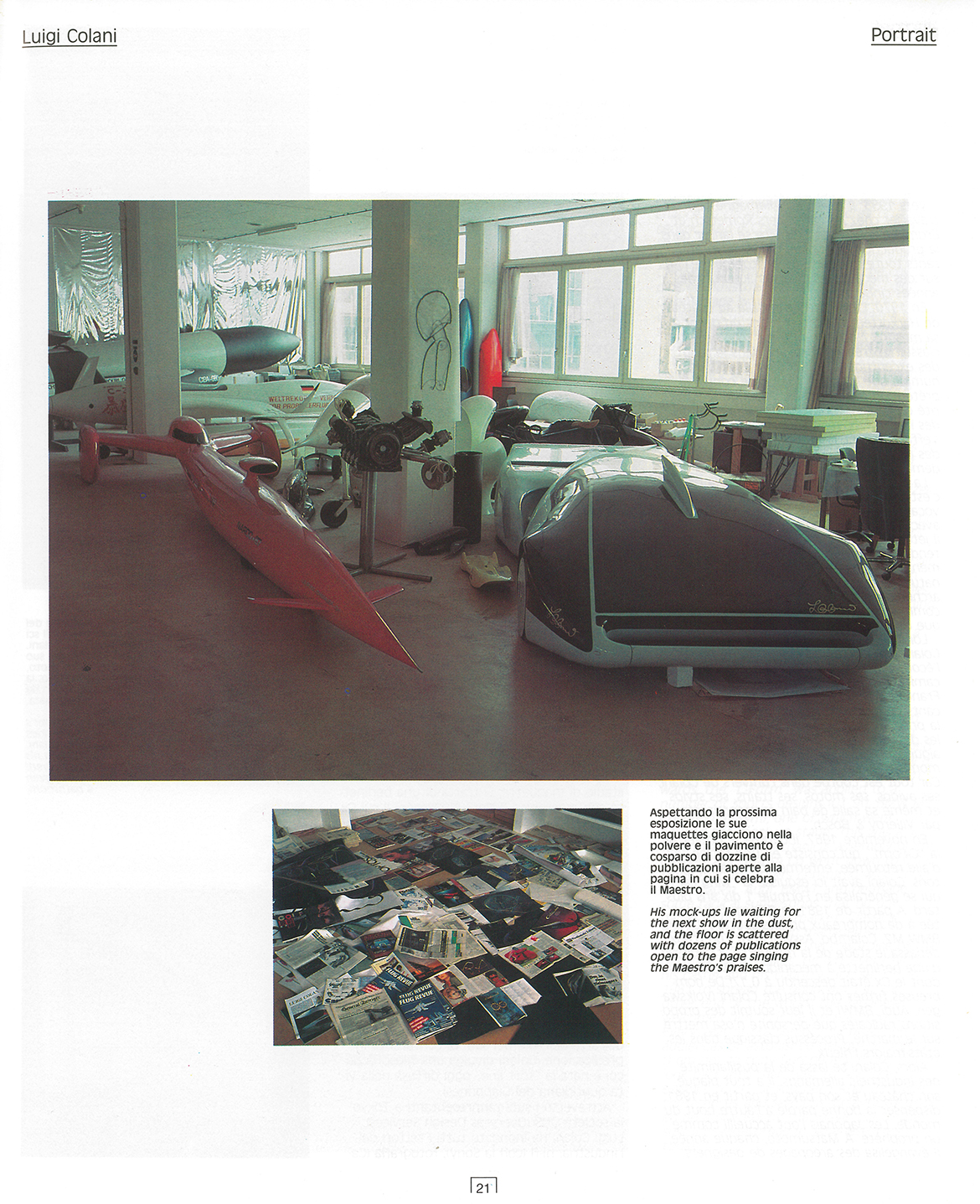 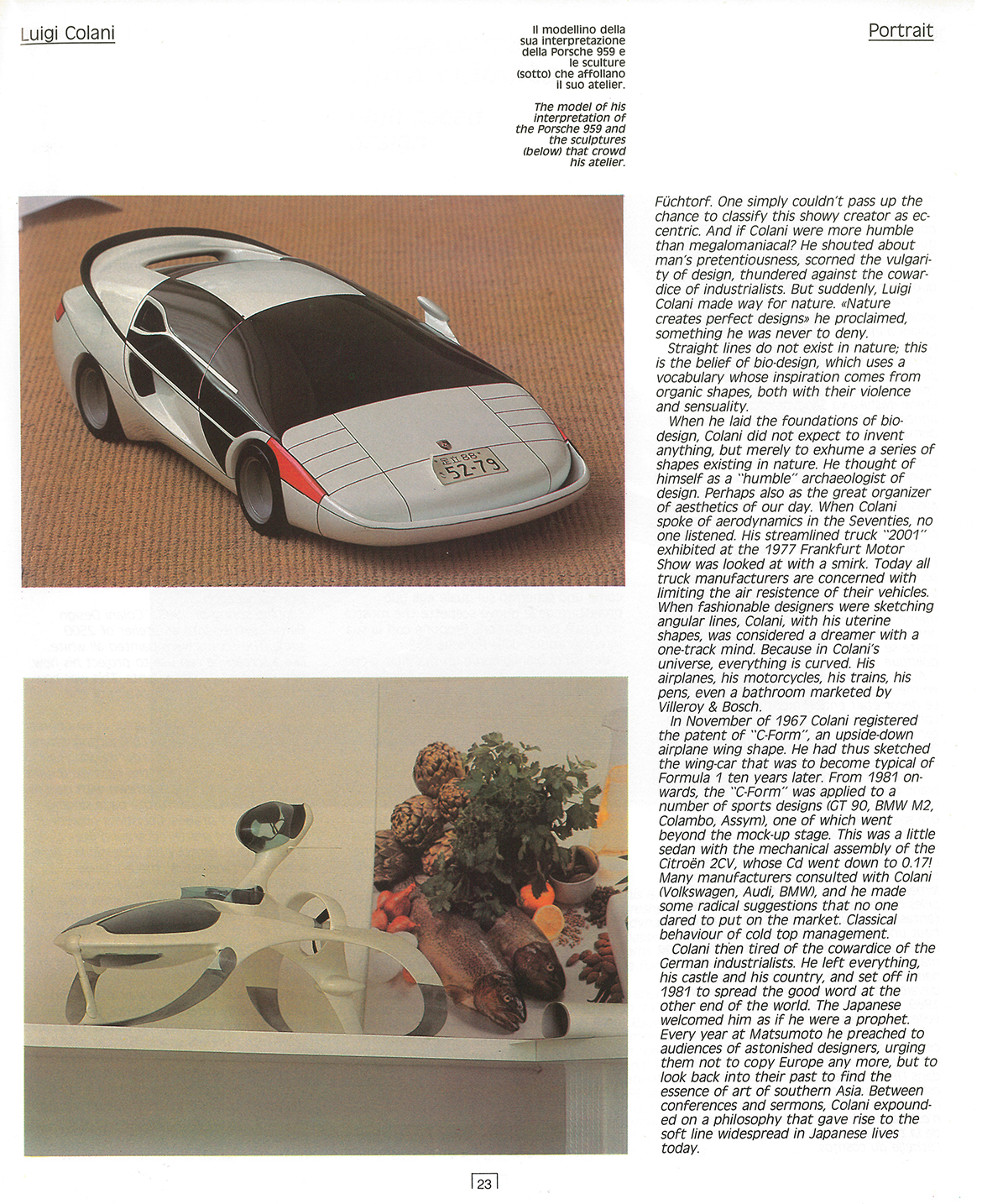 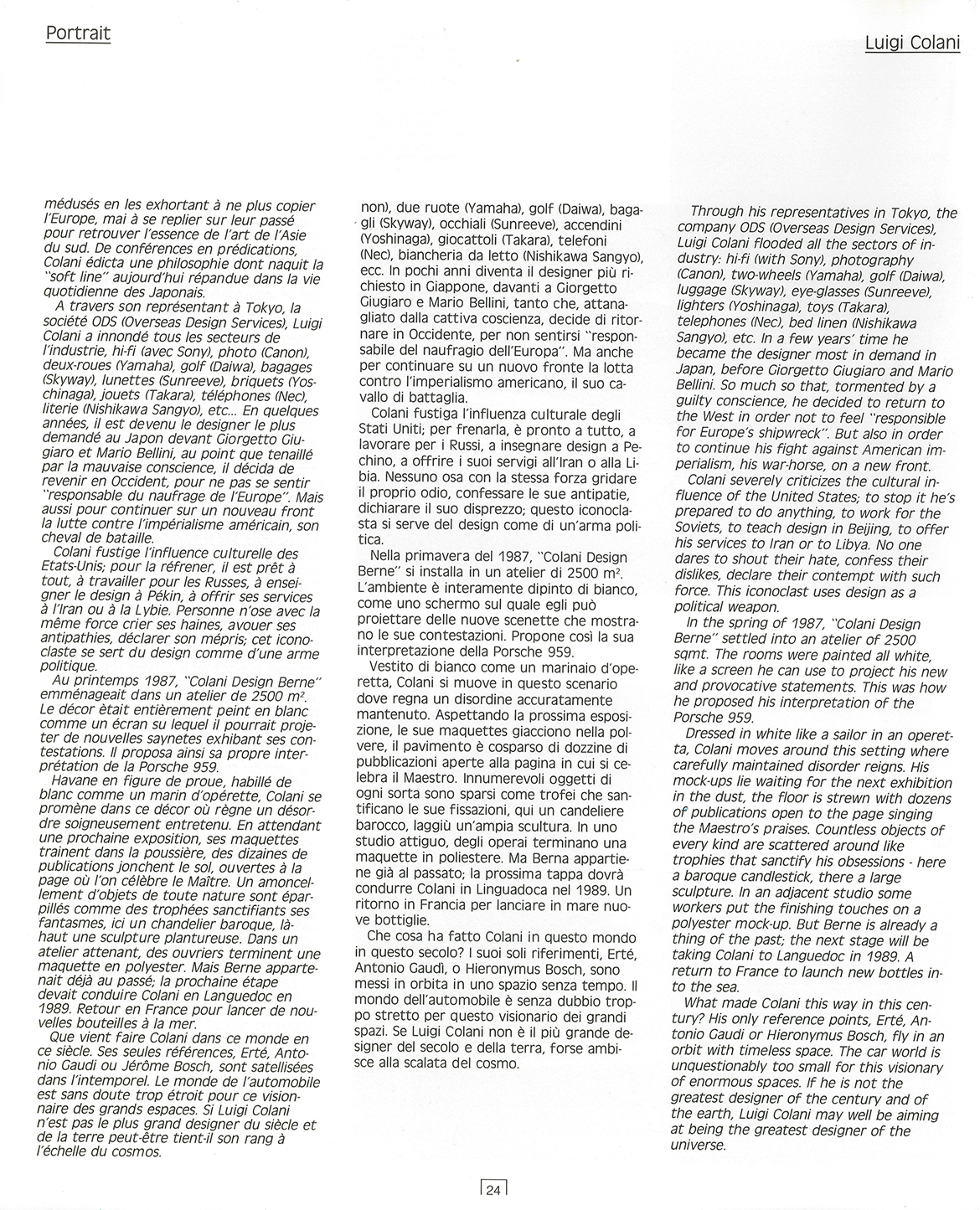