BMW M unveiled the XM concept at Art Basel 2021 in Miami Beach. The model, the production version of which will arrive at the end of 2022, boasts several firsts: It is the first BMW M to be electrified with a plug-in hybrid system and the brand’s first model not derived from a Bavarian manufacturer’s car since the M1 in 1978. “The styling of the XM Concept shows an extravagant statement of intent that goes to the heart of the luxury segment,” says Domagoj Dukec, head of BMW design. “It has a unique identity and embodies an expressive lifestyle like no other model in the range.” 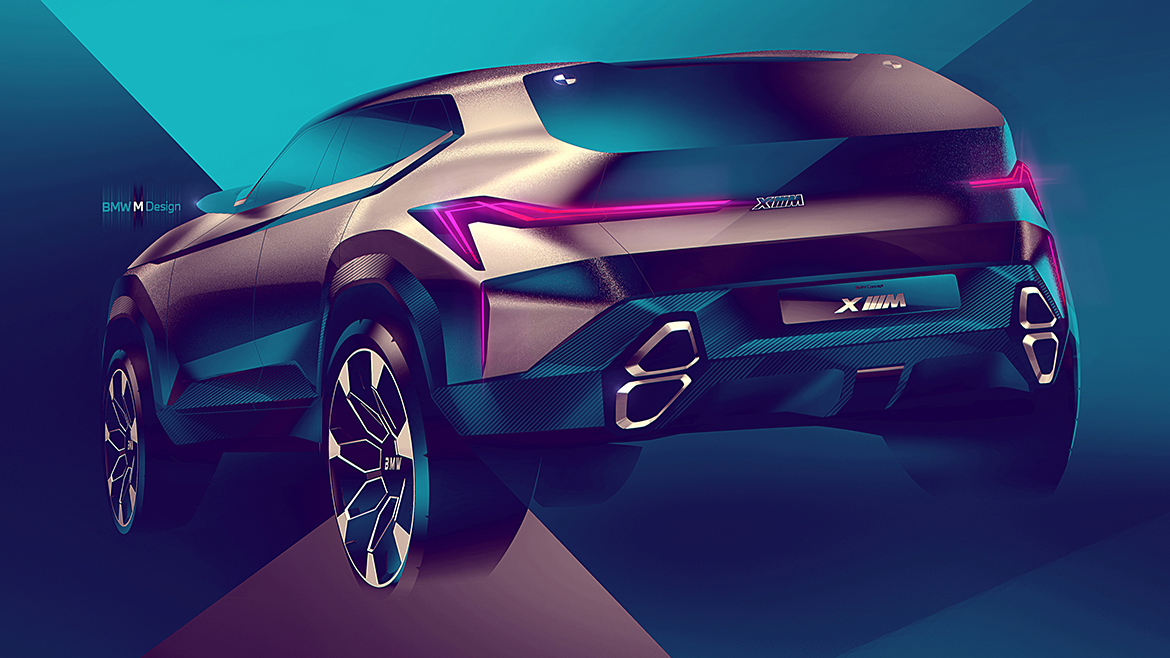 The headlights have been split into two separate modules, a new styling feature resulting in an eye-catching design. The grille has retained its horizontal double kidney grille and fits boldly between the headlights, tapering towards the outer edges and producing an almost octagonal contour that emphasises the dynamic character of the front end. The black elements of the double kidney grille are enclosed in a frame and seem to float freely within a glossy black surface. The new XM logo in the grille and the large air intakes suggest the power of the V8 engine, which combines with the electric motor to form the 750 hp M Hybrid system. 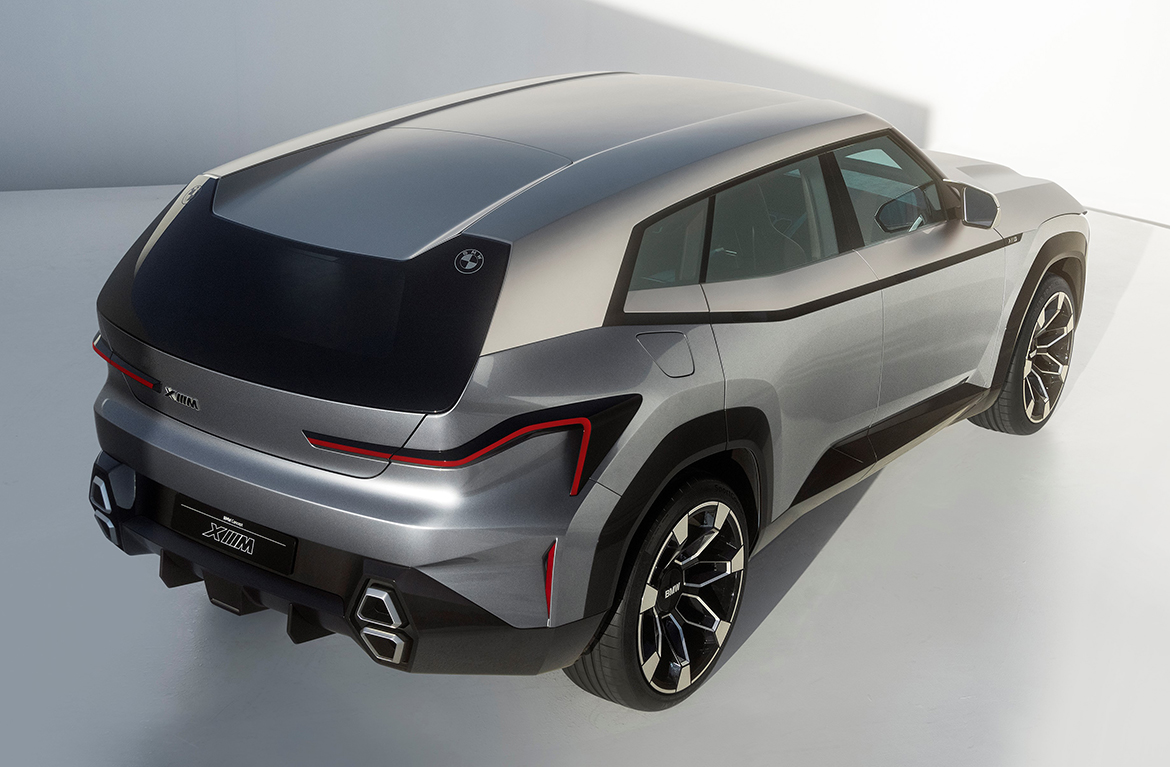 The powerful, strongly contoured proportions of the XM Concept underline the character of the car whose roofline descends swiftly to the rear reminiscent of a fastback and returning the styling theme to a sporting orientation. The rest is done by the long bonnet, a profile defined by short, broken lines, and the two-tone colours that further accentuate the volumes: the upper part is in matt golden bronze, while the lower part sports the metallic Space Grey shade. At the rear, the rear window seems to be integrated into the overall volumes almost seamlessly, while the BMW logo has been laser-engraved. 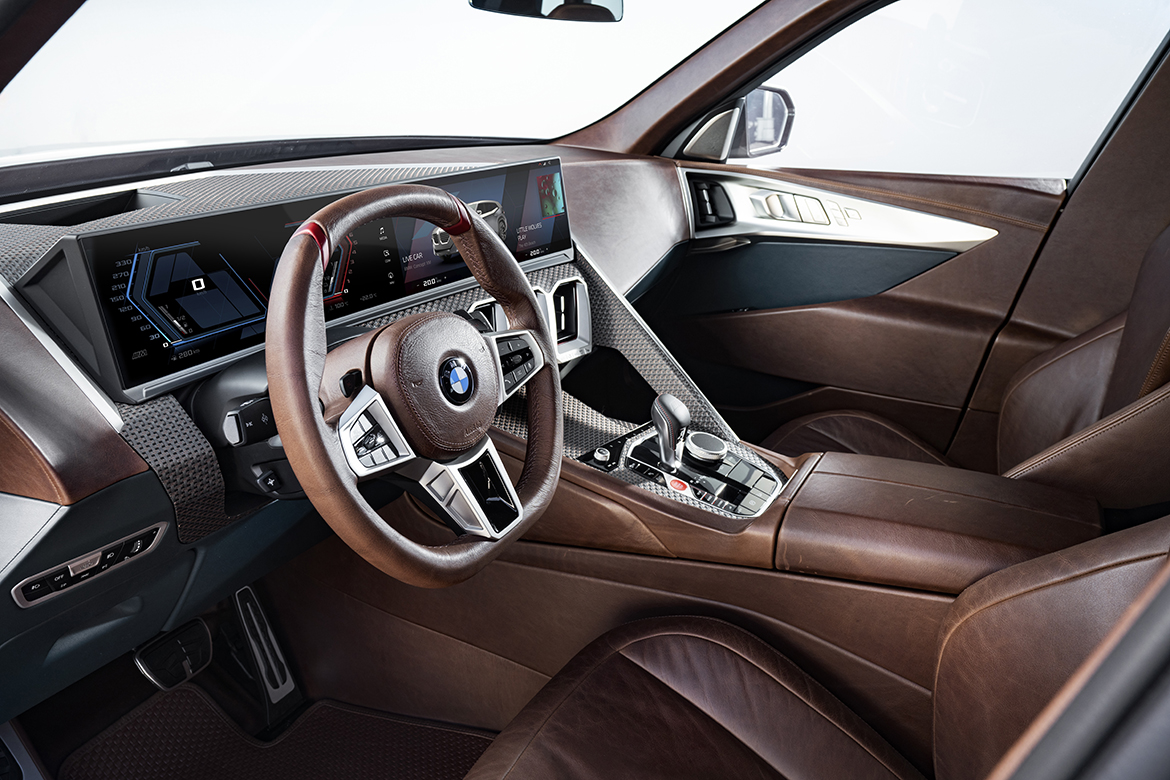 The lines and surface design of the dashboard, centre console, door trim and seats give the ambience in the front compartment a feeling of modernity and opulence. Through colours such as brown leather with a vintage look, and materials such as copper and carbon fibre, the designers’ intention was to create a connection between luxury and motorsport. Inside the cockpit area a decorative carbon fibre surface with woven copper wire creates a base for displays, air intakes and control elements. The XM is equipped with the BMW Curved Display, which debuted on the BMW iX electric SUV and from which the car’s multimedia functions are controlled. While the front end displays features and colours reminiscent of the sporting world, the rear end is designed to be lounge-inspired with specific materials and colours.